Clean and well-defined hydrogels consisting of only nanofibrillar cellulose and purified water. No animal DNA interfering with readouts.

Tune the microenvironment to suit your cells. The optimal stiffness is achieved by dilution with cell culture medium, and the culturing matrix can be customized easily by simply adding components such as growth factors or proteins directly to the gel.

GrowDex hydrogels do not have auto-fluorescence so imaging with any microscope or high content imaging system is simple.The ambient handling of the hydrogels makes them ideal for high throughput assays.

Cells and organoids can be recovered from GrowDex with a gentle one-step enzymatic process with our GrowDase without affecting the cells.

When the right hits matter - choose GrowDex for better predictability

Why transfer from 2D to 3D in High-throughput screening? 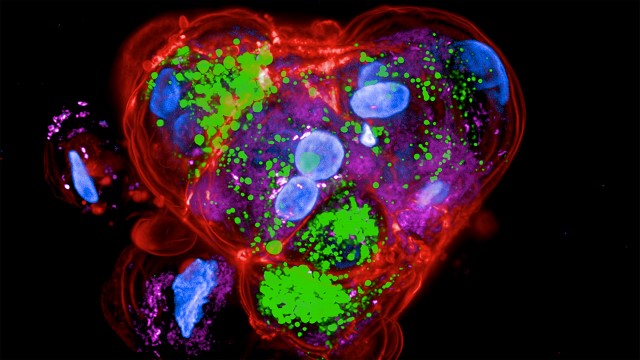 Advanced 3D cell-based assays for high-throughput screening provide a more physiologically relevant solution. Some of the current 3D models possess major obstacles in scaling up for HTS, as they are not reproducible, the costs are high, and there are several technical problems that cause challenges, including: automatization of liquid handling, temperature control, optimizing imaging and detection methods, chemical and physical properties of the matrix and downstream processing.

Animal derived materials used for 3D cell culture typically go through the polymerization of gels, which is caused by temperature. For scaling up assays in HTS this requires extensive temperature control and cooling down of instruments and reagents, so that the gels do not polymerize during dispensing. During screening, unexpected polymerization can clog pipette tips, cause variation in dispensing amount and lead to higher consumption of reagents, which increases the total cost of the assay. With GrowDex hydrogels you can do automated dispensing accurately and fast in room temperature.

The detection of fluorescent signals, for cell viability and proliferation assays is of key importance. Animal derived culture matrices often interfere with measurement caused by autofluorescence coming from the animal proteins. GrowDex hydrogels are not autofluorescent and contain only ultrapure water and nanocellulose.

To detect and recover RNA and DNA for downstream processing the animal-based hydrogels interfere with antibody labeling, purification and detection. Using our GrowDase cellulase enzyme, you can recover your precious cells from GrowDex hydrogels, without affecting the cells. GrowDase cellulase enzyme degrades only cellulose fibers and it does not affect the cell proteins, structure or viability.

With over 150 different assay protocols available GrowDex is our original hydrogel. Highly biocompatible GrowDex has been used widely for the culture of primary cells through to iPS and ES cells.

If you are looking to customise your hydrogel then GrowDex-A is for you. GrowDex-A has been modified by the addition of an avidin group so you can attach any biotinylated molecule you like.

GrowInk Bioinks for 3D printing, can be mixed directly with cells for bioprinting applications. The matrix can be customised by the addition of molecules, such as growth factors or adhesion proteins, as needed by your specific cells.

See how it works - scale up with confidence

Automated dispensing of GrowDex to 96- and 384-well plates with ThermoFisher Multidrop.