Winner of the GrowDex Image Competition 2017

The 2017 GrowDex image competition was awarded this year to Vili Auvinen and Arto Merivaara. Their image of HepG2 cell that had been freeze-dried in GrowDex was selected by Professor Ursula Graf-Hausner. The winning team is now the proud owner of an Apple Watch.

Steve Rees had the honour of selecting the best poster at the 2017 Visions for 3D Cell Culture Conference. The award was made to Piia Mikkonen for her poster entitled "Precision cancer medicine based on 3D drug profiling of patient-derived cancer cell spheroid models.

Congratulations to Vili, Arto and Piia! 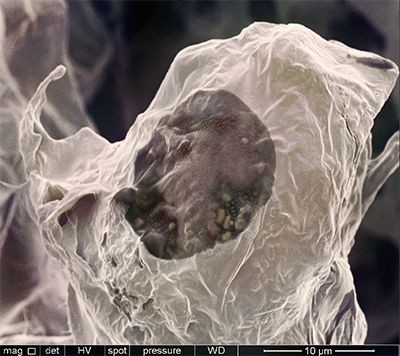 Winner of the GrowDex Image Competition 2017: SEM image of a single HepG2 cell encapsulated in GrowDex after freeze-drying by Vili Auvinen and Arto Merivaara from University of Helsinki, Finland.