Long-term hepatocyte cultures are needed in the safety evaluation of chemicals and drug compounds. As the liver is the most important organ in terms of foreign substance metabolism, stable enzymatic activity of hepatocytes is crucial.

In a study conducted by Admescope, human primary hepatocytes were cultured using GrowDex in a 96-well microplate. The cells were cultured for 35 days with continuous monitoring. Throughout the experiment, cell viability and albumin secretion analyses indicated good viability and liver cell-like functionality. The activity of CYP3A4 enzyme – the most common drug metabolizing enzyme in the liver – was measured to assess the metabolic competence of the cells. Analysis of testosterone hydroxylation showed that the primary hepatocytes grown using GrowDex stayed enzymatically active over the entire 35-day culture. 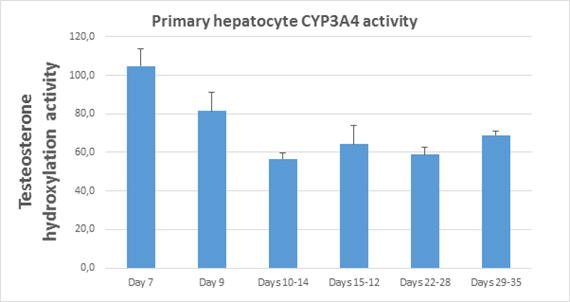 CYP3A4 metabolic activity of primary hepatocytes during the 28 days 3D culture (after 7 days pre-culture) in GrowDex.

This study demonstrated that GrowDex can be used as a matrix to successfully culture primary hepatocytes. During culture, the cells formed 3D spheroid structures with good viability and liver cell-like functionality, retaining their CYP3A4 activity. Culturing primary hepatocytes in GrowDex is an effective way of extending their experimental lifetime, making them useful for applications such as repeated dose toxicity studies.