Phages: a special force to fight bacteria! When antibiotics fail, bacteriophages could come to our rescue The global fight against the threat of antibiotic-resistant bacteria has begun. The participants of the Immunobiology Research Programme at the University of Helsinki have rolled up their sleeves as well. Elbow-deep in waste water, Professor of Bacteriology Mikael Skurnik and his team are determined to find the right bacteriophage to engage each enemy bacterium. Skurnik believes that phage therapy might be included in the Finnish Current Care Guidelines in just a few years’ time.

Bacteriophages, or phages for short, are viruses that infect a bacterium to replicate inside it, until they finally destroy the host bacterium. Unlike antibiotics, which affect a wide range of different bacteria, phages only target specific bacteria for destruction. This is both an advantage and a disadvantage. On the one hand, the specific nature of phages prevents them from destroying beneficial bacteria inside the human body as antibiotics do. On the other hand, both bacteria and phages come in thousands of varieties, which means that the success of treatment depends on the ability to identify the type of bacteria in question and find a suitable phage to combat it.

“As with antibiotics, it’s also possible to develop resistance to phages. However, this only happens when there are changes affecting the unique structure of the bacterial cell surface to which the phage attaches itself. In many cases, such changes are in themselves harmful to the bacterium,” Mikael Skurnik explains.
Phages pose a challenge for more than just bacteria: pharmaceutical companies also find it difficult to generate profitable business from specific products that need to be tailored to each patient. This has led to a situation where research funding and therapy development work dedicated to phages lag far behind the potential level of benefit. Still, the body of research has been growing significantly and consistently since the 1990s, in step with the increase in antimicrobial resistance all over the world.

Phages to be adopted as a standard therapy in Finland?

Phages were discovered as early as 1917 by Félix d’Hérelle from the Pasteur Institute in Paris. Upon examining the bacterial population of a patient recovering from dysentery, d’Hérelle observed some clear patches. What was the factor causing the thinning of the colonies? This led to the discovery of what soon became known as the bacteriophage, “bacteria-eater.” It can therefore be said that knowledge of bacteriophages goes back a long way, and a lot of research has been done in the area. However, they are only actively used to treat patients in Russia, Georgia and Poland.

“Phages can already be used to treat patients in Finland today, but only after all other therapies have been found ineffective. This is made possible by the Declaration of Helsinki, issued in 1964. Phages have been used to treat severe burns, for example. In Russia, phages are available in pharmacies without a prescription. Due to the long tradition of research in this area, the Russians also have a wide range of bacteriophages available to create cocktails tailored to the patient’s symptoms,” says Skurnik.

Skurnik first encountered bacteriophages when working on his master’s thesis in 1976. From his dissertation research onwards, Skurnik has been examining the mechanisms of bacterial infection, using bacteria from the genus Yersinia as model organisms. The most infamous of them is Yersinia pestis, the bacterium behind the dreaded Black Death in the Middle Ages. Bacteriophages were used in these studies, as well. Skurnik’s winding academic path led him to several universities, different countries and various positions, until his merits and experience won him the position of Professor of Bacteriology at the University of Helsinki in 2002. Skurnik is now leading a research group that is working tirelessly to enable the use of bacteriophages in Finland. The research is covered until 2020 by funding granted by the Jane and Aatos Erkko’s Foundation, as well as state funding received through the University Hospital. 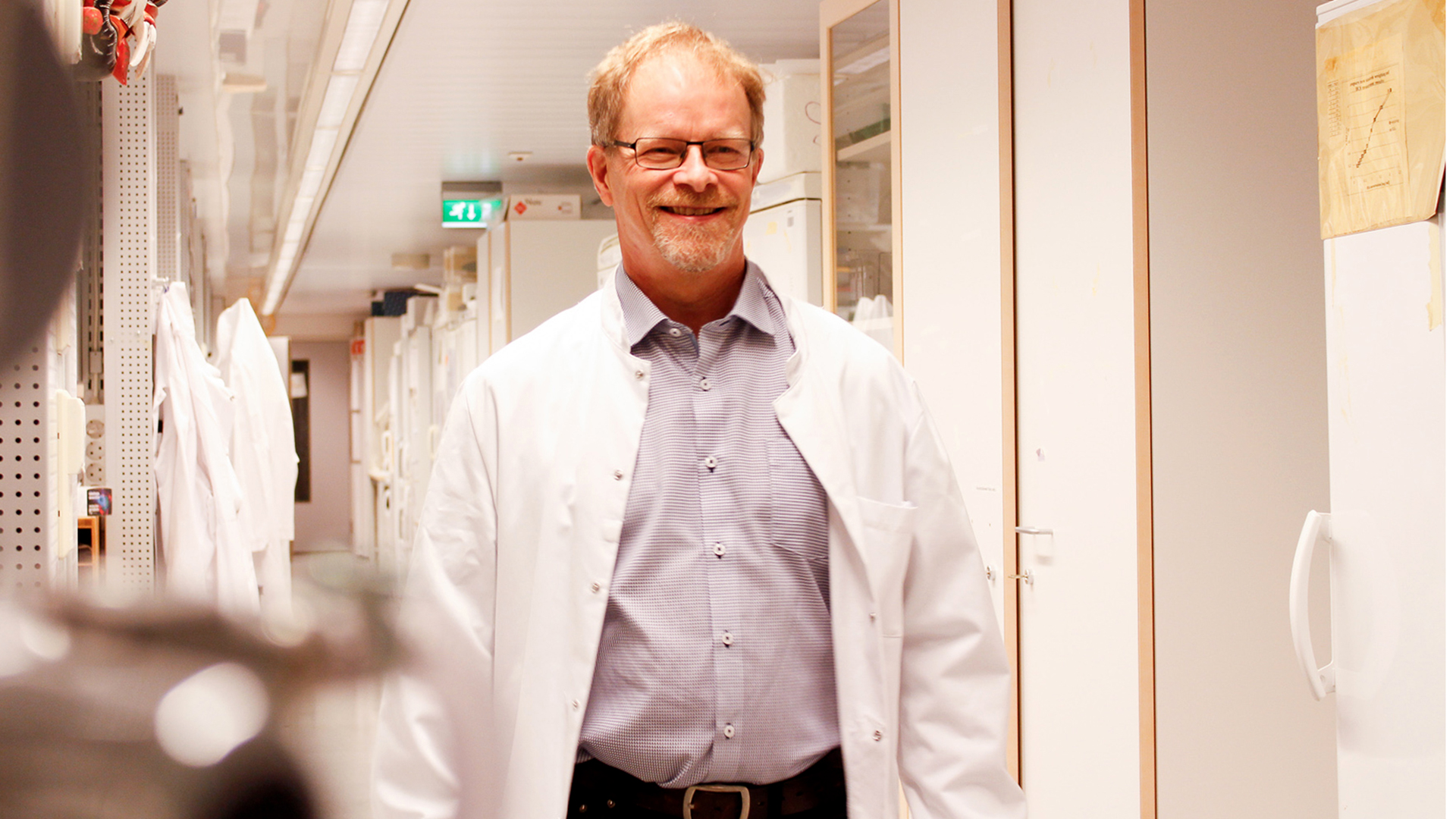 Professor Mikael Skurnik at his laboratory.

A few hurdles still remain that need to be cleared before phages can be introduced into the Finnish healthcare system. So far, Skurnik’s research group has been able to isolate more than 400 different kinds of bacteriophages. They could cover approximately 40% of the pathogenic bacteria isolated from patient samples in the HUSLAB clinical microbiology laboratory. Wherever bacteria are found, there are always bacteriophages, as well. This means that they are typically isolated from waste water.

“We would need a range of at least a thousand phages to reach 70% coverage in the patient population. At that point, bacteriophages could be useful in treating various types of bacterial infections, and the investment required to maintain the system would pay for itself through the savings made in days of illness and treatment,” Skurnik says.

Phage research costs have decreased significantly due to advancements in technology. For instance, when Skurnik needed to determine the base sequence of one bacteriophage in 2004, it cost nearly EUR 50,000. Today, the same result can be achieved for less than EUR 100.

“Even though the use of bacteriophages requires that both the strain of bacteria and the suitable phage are identified first, therapy can still be administered quite fast. In the case of our latest burn patient, we were able to begin treatment in significantly less than a week. My vision for the future is that any strains of antibiotic-resistant bacteria isolated in a patient sample should be immediately delivered to a phage laboratory, where it would be determined quickly whether the necessary phage was already available, or if it needed to be found. This type of treatment system would obviously require the appropriate facilities and staff, as well as funding to maintain it. One area where bacteriophages could be utilized is preventive treatment, for example against gingivitis. They could even be used as probiotics,” Skurnik explains.

Furthermore, the methods used to isolate bacteriophages and manufacture phage therapy products also need to be perfected before phages can be adopted as standard therapy options. “The Finnish Medicines Agency Fimea verifies all processes to ensure patient safety. As with any other medicinal product, the purity and safety of phage products need to be at an excellent level,” Skurnik says.

UPM and Mikael Skurnik crossed paths at the HiLIFE Goes Business event in 2017, where UPM was presenting GrowDex® hydrogel. Skurnik reached out to UPM the same day, and they decided to join forces to find out how GrowDex and bacteriophages would get along. As with any other treatment, phage therapy requires standardized procedures. One element of this is the safe and practical transport of phages to the patient. Could GrowDex provide suitable conditions for storing and transporting bacteriophages?

“We started investigating how these two react and how the viscosity and other properties of GrowDex could be used in phage research and development. We soon discovered that nanocellulose has no harmful effects on phages.”

A small drop of the GrowDex-phage mixture with a diameter of 2.3 mm is added to a microplate well, which is then closed. Because of the properties of GrowDex, the mixture sticks to the bottom of the well and will not spill during transportation.

“We performed a practical test. We mailed a 96-well microplate filled with the mixture to a colleague in Raisio during the winter, when the temperature was –15°C. A few days later, our colleague brought the package back to us, and we noticed that due to the properties of nanocellulose, the GrowDex drops had remained at the bottom of the plate and the bacteriophages were still alive and infective. Then we made a similar test delivery to Germany,” Skurnik describes.

More research is being done regarding the use of GrowDex in possible bacteriophage products, such as gels and wound care products that are used to deliver the phages to the inflamed area.

“This type of business collaboration opens up new ideas and applications for utilising the products. When people from different industries come together, it always leads to new perspectives,” Skurnik says.
Are you ready to meet the specifically talented phages? As antimicrobial resistance increases around the world, more and more of us may someday feel lucky to have phages as our invaluable viral friends.

Radio interview with Mikael Skurnik on Yle Puhe (in Finnish)