Dr Akihiro J. Matsuoka, Director of Audiology in the Department of Otolaryngology at Feinberg School of Medicine, Northwestern University in Chicago, US, has dedicated his entire career to audiology and vestibular organ research. His work currently focuses on differentiating human embryonic stem cells into glutamatergic auditory neurons, for use in patients with severe to profound sensorineural hearing loss. He discusses his use of GrowDex® as a matrix for improving survival of stem cells that are transplanted into the inner ear of patients.

Dr Akihiro Matsuoka trained as a computational neuroscientist before subsequently qualifying as a neurotologist in the late nineties. At the time, one in a thousand babies were being born deaf, but the recent development of cochlear implant technologies was beginning to help a huge number of patients – children and adults – to overcome hearing loss. The implants act as a replacement for damaged hair cells in the ear, capturing sound vibrations and translating them into electrical impulses that can be picked up and transmitted through neurons to the brain. However, as the implant procedure became more common, it became clear that 10 to 20 per cent of babies were not entirely benefitting from the device. Although the implants were functioning correctly, these individuals lacked the auditory neurons that would be stimulated by the system.

The promise of stem cells

Akihiro turned his attention to this patient group and started to work on finding a way to generate neurons that could be combined with cochlear implant technology. He switched his research to a postdoc in the field of stem cell biology, as he explained: “I realised there were two ways we could approach this problem. One would involve gene transfer using a viral vector, which is very difficult to accomplish and, at the time, had negative connotations to the public at large. The alternative was to use stem cell replacement therapy to grow new auditory neurons, and this became the basis of my research.”

“This is a very exciting field of research, because we are able to regenerate the stem cells from the patient’s own skin or blood, which can then be transplanted into the inner ear. We have developed a protocol to differentiate embryonic human stem cells into human auditory neurons, that has now been successfully reproduced by other researchers, which is amazing.”

A hostile environment for stem cells

While the initial stem cell work was very encouraging, the next significant challenge was low post-transplantation cell survival. Akihiro continued: “The inner ear basically consists of bone and fluid; it’s a nutrient-deprived environment, which makes it extremely challenging for stem cells to survive. For this reason, we tried at first to fully differentiate cells before they were transplanted in to the inner ear. However, the disruption caused by mechanically or enzymatically removing the cells from the Petri dish frequently initiated apoptosis.”

“We needed to create a stem cell niche – an in vivo environment where stem cells could thrive and receive stimuli to determine how they would differentiate – that would aid survival of the cells within the ear. We began to look at how we could use hydrogels to help this whole situation, and first conducted an in vitro study to confirm that we could culture stem cells in the matrix, and that they would differentiate into the neurons we required.”

“We have now reached a stage where we are transplanting cells into mouse models. The first step is to partially differentiate the stem cells into neural progenitors that are ready to be differentiated into neurons. At this stage, the cell cycle is paused while they are transplanted into the inner ear of the animal in hydrogel, where they can then differentiate into glutamatergic neurons. We are hoping that this will improve the likelihood of cell survival.”

The benefits of animal-free

“One major benefit of the GrowDex and GrowDex-T hydrogels we are using for this work is that they are composed of cellulose. Other gels we have used previously have attracted leucocytes and macrophages, which might also contribute to low post-transplant cell survival and, although we are still in the early stages of this work, we haven’t yet seen any inflammatory or immunological responses to GrowDex. Another benefit of GrowDex is that it remains stable inside the ear for quite a long period of time; we had used other biodegradable hydrogels that had broken down within a week. Additionally, the gel viscosity of GrowDex is already pre-determined, and this doesn’t change after transplantation, so we haven’t needed to account for environmental differences in vivo.”

“Although this work is in its infancy, partially differentiating stem cells extracellularly seems to be the way to go, and I believe other researchers are also finding this in similar techniques they are using with Parkinson’s patients. If we can improve the survival of these neurons in patients, I am very hopeful that we will be able to overcome the limitations of cochlear implants and treat sensorineural hearing loss far more effectively,” Akihiro concluded. 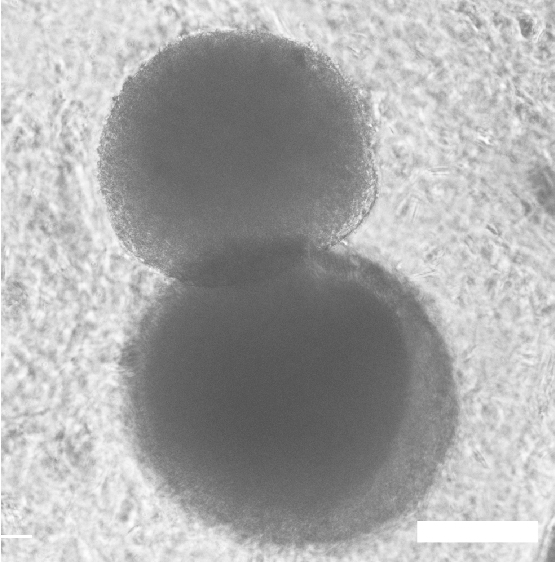