Susanna Narkilahti: In vitro modelling of the human brain The BioMediTech (BMT) NeuroGroup at Finland’s Tampere University is focused on the production of neuronal and glial cells from human pluripotent stem cells, with the aim of understanding their maturation and electrophysiological function at both the single cell and network levels. The laboratory employs a wide range of 2D and 3D culturing systems to develop in vitro models of diseased and healthy brain tissues, as Group Leader Dr Susanna Narkilahti explained.

Susanna Narkilahti began her career studying epilepsy and epileptogenesis in rodent models, before switching her focus to human in vitro systems in 2005. The advent of induced pluripotent stem cells (iPSCs) in 2007 proved a turning point for her research, allowing the production of both healthy brain and novel disease models from patient cells. Susanna explained: “Before arriving in Tampere, most of my previous work had been with animal disease models, but there is a limit to what these can tell you given the physiological differences between human brains and rodent models. I therefore chose to jump from the in vivo to the in vitro world. We initially started with human embryonic stem cells, but the development of iPSCs in 2007 offered us a completely new perspective. This allowed us to take cells from a patient with a given genetic disease, and create a culture of human neurons with the same cellular dysfunctions. This was an important breakthrough, as it allowed us to develop functional cell-based platforms to better understand the underlying biochemical mechanisms of disease, as well as to develop better therapeutic interventions for these patients.”

Although the ability to investigate the genetic origin of a specific individual’s disease is extremely beneficial for the development of personalised medicine approaches, this is less helpful for a wider understanding of disease mechanisms. Susanna continued: “We try not to focus too much on a particular disease, as many neurological disorders are actually a collection of several different, phenotypically-related conditions. Our aim is therefore to create in vitro platforms which can be used to investigate specific phenomena or conditions. For example, we can induce axonal damage that mimics a certain type of brain injury or disease. We don’t necessarily always have the actual genetic disease in the background, but we take part of the mechanism of that disease and model it to understand how it could occur in vivo.”

“Another exciting aspect of our work is looking at how the human brain develops. Most of our current knowledge in this area is from a combination of rodent models and in vivo imaging of humans, but the human brain is quite different from a mouse or rat brain, and we still don’t know that much about how it develops. Using an iPSC-based approach, we can generate human neurons in a Petri dish, and observe them creating spontaneous, active neural networks – it’s quite beautiful.”

“For many of our experiments, traditional 2D cultures are sufficient. After all, you should always choose the simplest model that works to answer a given scientific question. However, neurons do not grow in 2D or in isolation in vivo, so it is equally important to use more complex culture systems to investigate complex intercellular interactions. We are lucky to have close relationships with several engineering groups within Tampere University, and so have taken a collaborative, multidisciplinary approach to develop a number of cell culture tools for our research. This includes novel solutions that bridge the gap between 2D and 3D cultures – we call it 2.5D – by integrating microfluidic solutions and/or sensor technologies into the system. However, in many cases, there is no substitute for true 3D cultures, and so we have a long history of developing 3D brain tissue models.”

“Because the brain is a relatively soft tissue, the scaffold structures that typically work best for cultivating neuronal cells are soft and elastic, such as hydrogels. However, it is surprisingly challenging to build good 3D neural networks of human cells – far more difficult than using rodent neurons. We have therefore put a lot of effort into this area, and have established a nice ‘toolbox’ of different hydrogels that we can use depending on the experimental question.” 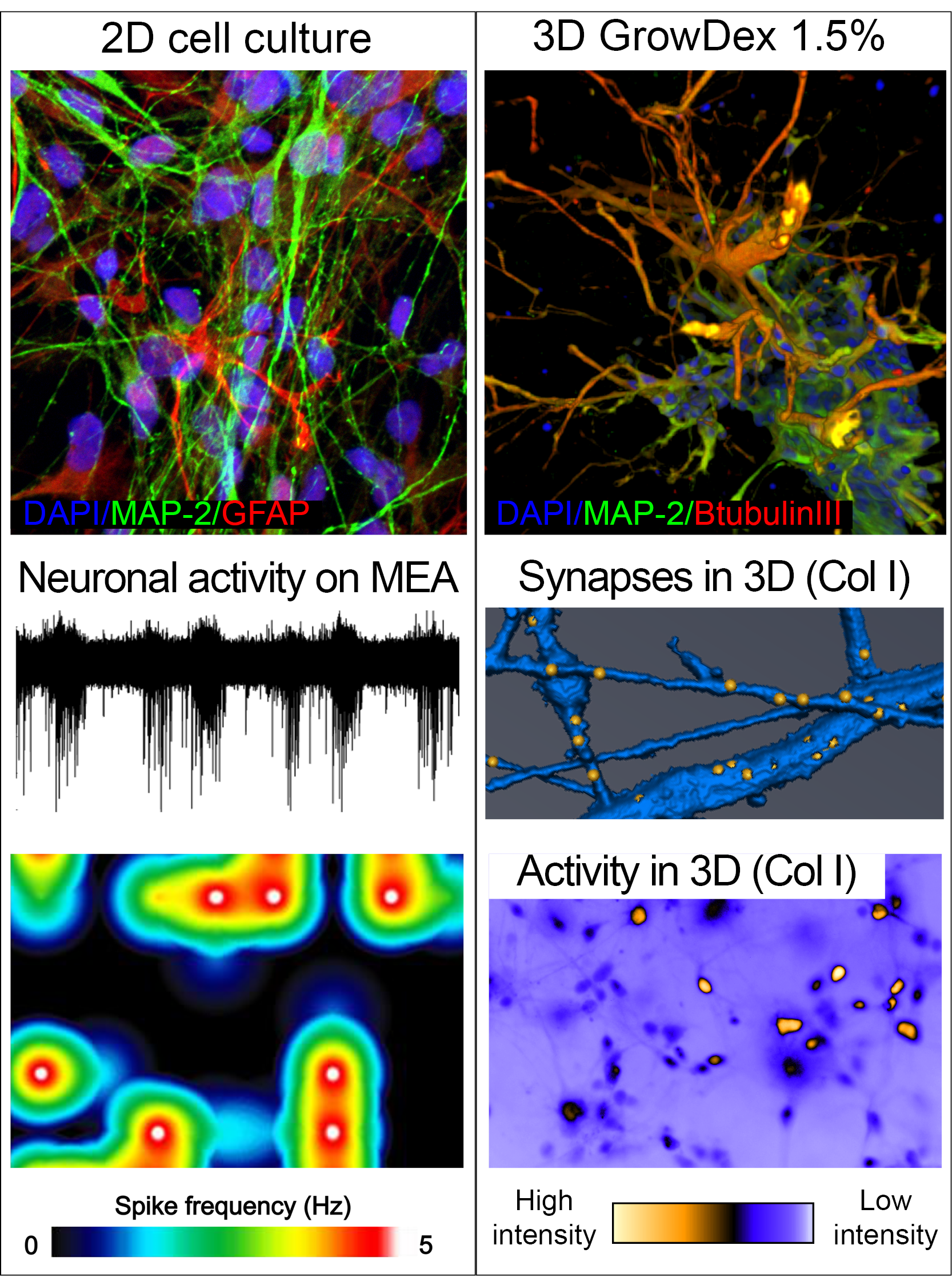 “We are always looking at new technologies, and working in such a small field, we have obviously been aware of the GrowDex® 3D cell culture system since the early days of its development at the University of Helsinki. When UPM Biomedicals began commercialisation of the product, we collaborated with the company to assess its performance for culturing human neurons, and were very surprised by the results. We know from experience that human neurons are very sensitive to their extracellular environment – including the local charge – and so we honestly did not expect the GrowDex to work at all. However, it actually worked very well, promoting good neuronal network formation.”

“Using these types of 3D culture technologies to develop ‘organ-on-a-chip’ systems is an exciting area of research across a number of human biology disciplines at present and, here at Tampere, we are involved with a large Academy of Finland-funded project called the Centre of Excellence for Body-on-a-Chip (CoEBoC). This project aims to connect multiple chip-based organ models together into a functional system, and the latest proof-of-concept system created in the USA includes 10 organ chips. The next challenge is to connect vascularisation and innervation across these organ models, and so a current focus of our research is to develop technologies to allow us to guide and control axonal growth – instead of networks forming randomly. There are several approaches we could take to achieve this, and we are currently exploring which option will give us the best control of the development of axonal tracts.”