Culture expansion of cells in 3D versus the classical 2D approach is proving to be an invaluable tool for use in assay development, for use in drug screening, as well as providing a clearer understanding of cell behaviour in cell-based regenerative therapies [1, 2]. Notably, mesenchymal stem cells (MSCs) are the most researched cells for their potential use in cell-based therapies. As such, it is crucial to fully characterise these cells within novel 3D environments prior to their use and application for such therapies.  It has been previously shown that cell seeding density and the 3D cell carrier affect the behaviour and differentiation capacity of bone marrow derived and umbilical cord/Wharton's jelly derived MSCs towards bone and cartilage regeneration respectively [3, 4, 5].

Here, adipose derived MSCs (ADMSCs) were cultured in nanofibrillar cellulose, GrowDex®, under various conditions for 1 week to characterise their behaviour ahead of use in the development of further cell based assays.

Following 7 days culture expansion of the ADMSCs at 37°C, cell spheres were visible in all sample wells. The spheres varied in both size and number depending on the initial cell seeding density and the concentration of GrowDex used for the culture.

Small spheres were observed in all wells irrespective of the GrowDex concentration or the initial cell seeding density used (Fig.1-2).  The number and size of spheres was quantified for each sample and it was found that the majority of spheres had an average size less than 500 µm2(Fig.3).  However, in 0.1% GrowDex larger spheres ranging from 500 – 200,000 µm2  were also observed at cell seeding densities of 250 – 500 cells/µl.  At the highest cell concentration (1,000 cells/µl) and 0.1% GrowDex a very large sphere, size >200,000 µm2, was present in all three wells (Fig.1 C & F)

Within 0.4% GrowDex, the number of spheres were seen to increase relative to the seeding density, from 250 to 1000 cells/µl. However, these spheres showed little variation in sphere area (Fig.2 J-L, Fig.3 A & D).

Figure 2. Primary ADMSCs cultured for 7 days in GrowDex at concentrations of 0.2% (G-I) and 0.4% (J-L) with differing initial cell seeding densities. 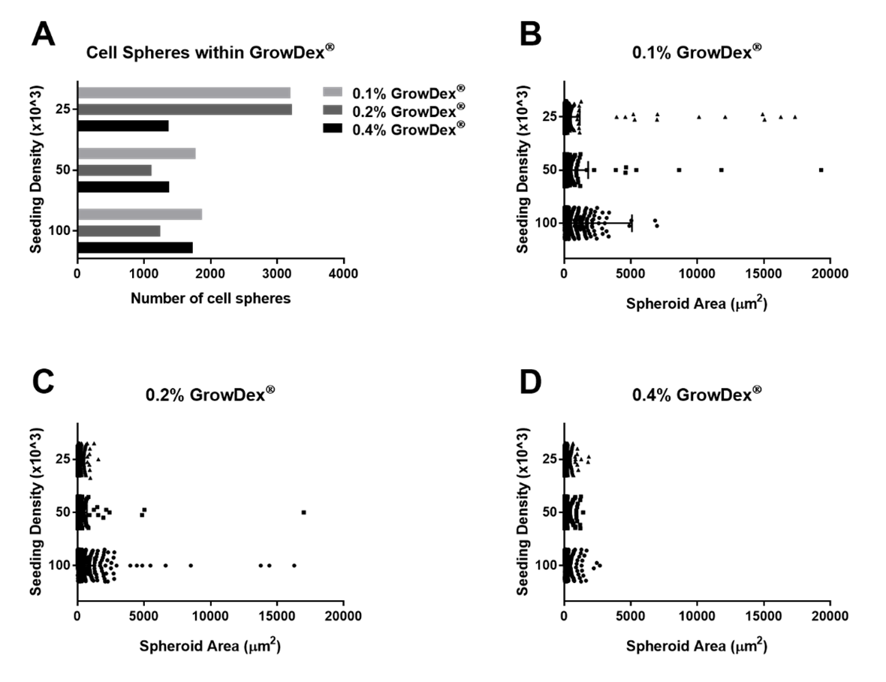 Differences in seeding density is known to impact cell bahaviour. Notably, MSCs isolated from Wharton's jellys were shown to have higher glycosaminoglycan and collagen contents when seeded at densities of 25 to 50 thousand cells/µl on a non-woven polyglycolic acid scaffold [4]. Additionally, bone marrow MSCs seeded onto a copolymer scaffold at higher cell seeding densities formed more bone than those seeded at lower densities following osteogenic induction [3].

From the results shown here, it can be easily seen that different cell seeding densities along with variable concentrations of GrowDex can affect cell behaviour after 7 days of cell culture; notably the formation cell spheres. However, other affects are yet to be determined.