1Department of Bacteriology and Immunology, Faculty of Medicine, University of Helsinki, Finland

The emergence of antibiotic resistant bacteria due to the misuse of antibiotics presents a global challenge in terms of increased morbidity, mortality, and healthcare costs [1]. According to the World Health Organization (WHO), antibiotic resistance is one of the biggest threats to global health, food security, and development of our time [2].

Bacteriophages (phages) are viruses that infect only bacteria. They take over the host bacterium metabolism, use it to reproduce themselves, and kill the host bacterium. Phages have high host specificity; a given phage can only infect a certain bacterial species. One promising alternative to treat infections caused by antibiotic resistant bacteria is phage therapy (PT), where phages are used to kill the pathogens [3]. The positive outcome from the specificity of phages is that the adverse effects of PT are minimal, whereas the broad spectrum antibiotics cause adverse effects related to their effect also on the normal human microbiome.

The strict host specificity requires the therapy to be targeted individually for each pathogenic strain. In order to find an effective phage, fast and efficient screening of large bacteriophage libraries with the infecting strain is needed. The ability to store phages reliably for prolonged times is a prerequisite for their effective diagnostic and therapeutic use (Fig. 1). Bacteriophages need to remain viable during storage and shipping between laboratories. In this study, we demonstrated the use of nanofibrillar cellulose hydrogel, GrowDex®, as a storage, transportation and delivery matrix for the phages.

1.Effect of GrowDex on bacteria viability

3.Bacterial growth was monitored by measuring the absorbance at 600 nm for 6 h.

2.Stability and release of phages diluted in GrowDex and applied to a bacteria culture plate

1.GrowDex 1.5% was mixed with phage lysate to give a final GrowDex concentration of 1% or 0.5%, respectively.

2.Different dilutions of phage lysate were tested from 104 to 107.

4.Release of phages from GrowDex to infect and kill the bacteria on the plates was analyzed visually.

3.Viability and stability of phages in GrowDex tested in liquid cultures

1.GrowDex 1.5% was mixed with phage lysate to give a final GrowDex concentration of 1% or 0.5%, respectively.

2.The mixture was stored in tubes or in wells of a 96-well microplate in 10 µl drops.

3.200 µl of overnight bacterial culture diluted in LB medium was added to each of the  wells and the plate incubated at 37°C.

1.Effect of GrowDex on bacteria viability

If GrowDex is to be used as a storage matrix for phages it is important to show that it does not have an independent impact on bacteria viability. When S. aureus bacteria was cultured in wells containing GrowDex, the rate of bacteria proliferation was seen to be similar to the control condition without GrowDex (Fig. 2).

In order to infect and kill target bacteria the phages need to remain viable in the storage matrix.  However, equally important is the need for easy release of phages from the matrix so they are free to infect the host. Here it was shown that phage release from GrowDex not only resulted in infection of the bacteria (Fig. 3A,) but also gave comparable results to those obtained with release of phages directly from SM buffer or NaCl (Fig. 3B). The diluent, SM buffer (upper row) and NaCl (lower row), did not have an effect on phage infection capability.

Storage tests performed at +4°C showed that phages can remain stable and viable in GrowDex for extended periods of time. When stored in microcentrifuge tubes, all four of the phages studied were seen to retain their infectivity even after 6 months. The results with fRuSau02 phage are shown in Fig. 4.

When phages were stored in 10 µl drops of GrowDex at +4°C in 96-well microplates, some differences in the stability were observed. The small podoviruses, fTuEco01 and DSMZ phage, retained their activity throughout the 6 month study, fTu-Eco01 results at the 6 month time point is shown in Fig. 5A. However, large myoviruses such as fRuSau02 were shown to be  infective at 8 weeks (Fig. 5C) but were inactivate at the 6 month time point (Fig. 5D). It is thought that storage  in small volumes for greater than eight weeks may result in drying of the sample resulting in inactivation of large phages. 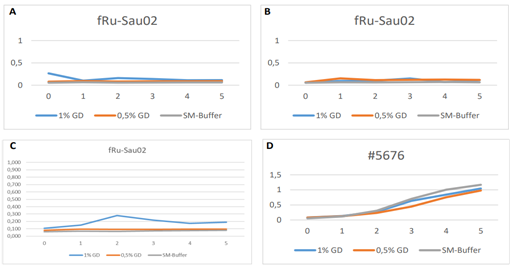 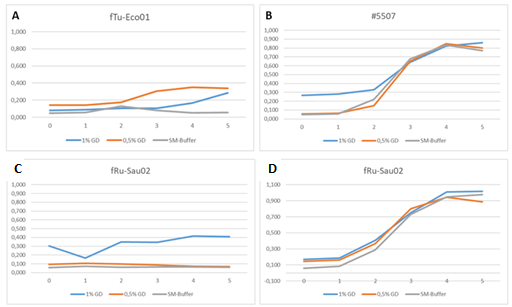 Figure 5. Phage activity after storage in 10 µl drops in a 96-well microplate for 6 months. fTu-Eco01 retained its infectivity (A), host E. coli strain #5507 culture without phage was used as a control (B). Large myovirus fRuSau02 (C) was active at 8 weeks but inactive at 6 months (D).

In the search for phages active against bacterial strains isolated from patients, phage libraries often need to be transported between different laboratories. Here a 96-well microplate containing phages dispensed in 10 µl drops of 1% GrowDex was shipped using the normal postal service between two sites. On delivery viability of the phages was measured using the protocols described previously. Results showed that all four phages remained viable after postal transportation indicating that a ready-to-screen plate may be likely possibility and hold great potential for the diagnosis and subsequent treatment of patients.

With topical infections delivery of phages to the infected area could be done by spraying phages directly onto the skin. Using GrowDex as a carrier for the phages could increase contact time with the skin, resulting in better efficacy and less pain for the patient. The  shear-thinning property of GrowDex means it becomes temporarily more fluid when a force is applied, thus it can be sprayed easily with e.g. finger-operated pump bottles (Fig 6A). Using this approach we are able to demonstrate that the phages remained active after spraying and were able to effectively kill the target bacteria (Fig 6B).

Figure 6. Delivery of phages in GrowDex hydrogel onto solid surfaces by spraying. Due to its shear-thinning property GrowDex can be sprayed using a finger-operated pump bottle (A). fRuSau02 phages in 0.5% GrowDex were sprayed onto S. aureus #5676 plates (B), 0.5% GrowDex without phages was used as a control (C).

Treatment of antibiotic resistant bacterial infections is very challenging and new innovative approaches are needed to treat infected patients quickly and easily. Phages offer great potential for treatment of these infections however as mentioned, would benefit from a robust way to store, distribute, diagnose and deliver phages to the patient. Here we have demonstrated the versatility of GrowDex as a matrix for phage storage, host range screening, and preparation of ready-to-screen phage plates. GrowDex can also be used as carrier for topical application of phages directly to the infected site. The robust nature, temperature stability and shear-thinning properties of GrowDex make it an ideal matrix for use in multiple bacteriophage applications.