Three-dimensional (3D) cell cultures are of increasing interest in research areas such as stem-cell based therapies and drug discovery. However, preparing 3D cell cultures can be difficult, and poor pipetting technique may lead to high variation in 3D cell culture experiments. Pipetting and mixing viscous hydrogels and sensitive cells are especially challenging. Picus® Nxt pipettes are ideal

for the preparation of hydrogels as they enable standardization of the sample preparation workflow, erasing the potential negative impact of personal pipetting practices. For 3D cell cultures such as spheroid applications, GrowDex® is an excellent choice of hydrogel: it is easy-to-use, animal-free, and has no batch-

to-batch variation. In contrast to many other hydrogels, GrowDex® does not require polymerization, thus allowing it to be handled at room temperature— making the product easy to work with and promoting reproducible results.

Poor pipetting technique causes low reproducibility between samples and experiments (Hawthorne et al., 2019, and Lippi et al., 2017). Preparing 3D cell cultures is challenging and prone to variability due to the hydrogels, pipettes, and tips used in the process, but most importantly due to individual pipetting practices. With electronic pipettes, you can use protocols with fixed pipetting speeds and mixing steps, consequently minimizing the variability introduced 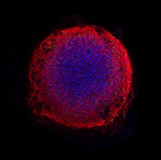 Preparing and pipetting 3D cell cultures can be challenging, because they often contain viscous hydrogels. Many of the available hydrogels are also temperature-sensitive, thus requiring cooled- down pipette tips, vials, and vial racks to avoid polymerization of the hydrogel during preparation of an assay. The lowest coefficient of variation (CV%) between 3D cell culture replicates was achieved when preparing and pipetting GrowDex® mixtures with Picus® Nxt by using the medium mixing speed

Figure 1. Medium pipetting speed and multiple mixing steps generates reproducible 3D cell culture results. GrowDex® (stock concentration 1.5%) was diluted to a working concentration of 0.4% by mixing it with 10% FBS-RPMI medium. The dilutions were prepared by mixing 10, 20, 30, or 40 times, applying different

aspiration and dispensing speeds (1, 5 or 7) on the Picus® Nxt 1000 pipette. The mixes were pipetted to 96- well plates (100 µL in multi-dispensing mode, speed setting 7, n = 12). The GrowDex® content in each well was quantified with a fluorescence assay. The CV% was calculated for each mixing condition separately.

On the other hand, mixing carelessly in a way that generates bubbles and foam results in high cell number variation and decreased cell viability (Figure 2). Same type of negligent mixing leads also to high variations in the amount of hydrogel in final samples (Figure 3). In this case, an increasing number of mixing steps increases the variability, as more and more bubbles and foam is introduced. 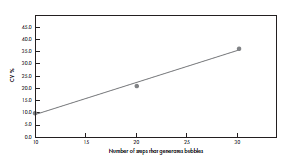 Figure 3. Mixing that generates bubbles, increases the variation in the volume of hydrogel in 3D cell cultures. Diluted 0.4% GrowDex® mixed with 10% FBS-RPMI medium was prepared by mixing different number of times (10, 20, or 30 times) with a Picus® Nxt 1000 pipette with the highest speed possible (setting 9), deliberately generating foam and bubbles. 100 μL of the mixes was pipetted to 96-well plates. The GrowDex® content was quantified and the variation between the replicates (n = 30) was determined. The average CV% are shown from two biological replicates.

well for pipetting viscous 3D cell culture mixes, and CVs <10% can be achieved when pipetting 30 µl to 384-well plates. However, we recommend Sartorius Low Retention tips in combination with the lowest speed (speed 1) on the Picus® pipette and reverse pipetting technique, because this generates the lowest standard deviation and error when pipetting highly viscous liquids, such as Triton X-100 (Figure 5). Low Retention Safetyspace™ tips and low speed are also recommended when pipetting liquids that tend to foam, such as liquids with high protein content.

Figure 4. Safetyspace™ tips are recommended for reproducible 3D cell culture pipetting. The GrowDex® content was measured with a fluorescence assay and the CV% for the replicates (n = 176) on each plate

Figure 6. 3D cell cultures with GrowDex® are typically prepared in two ways: embedding cells in GrowDex® or seeding cells on top of GrowDex®.

The “Embedding cells in GrowDex®” workflow was optimized with Picus® Nxt pipettes and the instructions including the time it took to execute each step is presented in Figure 7. Stock GrowDex® (1.5%) should be added directly into the cell culture medium. You should have a higher concentration of GrowDex® in Step 2, as the final GrowDex® concentration is reached when you add cells (suspended in medium) to the mixture (Step 3). The volumes pipetted to the 96-well plate can be modified depending on the application (Step 4 and 5). The total preparation time is only 16 minutes—significantly shorter compared to several other hydrogels combined with mechanical pipettes.

Figure 7. Schematic of preparing a 96-well plate with GrowDex®-embedded cells. Step (1) Dispense cell culture medium into a 50 mL tube and add GrowDex® (1.5%) directly from the syringe. Step (2) Use a Picus® Nxt 10 mL pipette and Optifit 10 mL tips to mix 40X using 10 mL volume (or maximum 75% of the total mixture volume) and aspiration and dispensing speed 3. Step (3) add cells to the GrowDex®-medium mixture and mix again using 10 mL volume (or maximum 75% of the total mixture volume). The GrowDex®-concentration should be twice as high as the final GrowDex®-concentration in the wells and the volume has to be sufficient to fill the 96-well plate (minimum 10 mL). Step (4) Dispense 100 μL of the GrowDex®-cell mixture with a Picus® Nxt 1000 pipette in multi-dispensing mode and speed 7. Step (5) Dispense 100 μL cell culture medium on top of GrowDex®-cell mixture with a multi- or single-channel Picus® Nxt 1000 in multi-dispensing mode (10 x 100 μL). The workflow can be completed in 16 minutes.

Poor pipetting technique is the main factor that results in well-to-well variability of hydrogel concentration, cell concentration and total well volume. In order to achieve low CVs, it is important to apply a standardized protocol using Sartorius electronic Picus® pipettes. One can reliably and reproducibly prepare 3D cultures using GrowDex® hydrogel by pipetting with any type of mechanical Sartorius pipette, such as Sartorius Tacta® pipettes, but electronic pipettes remove the person-to-person variability caused by differences in pipetting speed and mixing steps. Moreover, it is easy to fill 96-well and 384-well plates with Picus® pipettes when using the “Plate tracker” function. This prevents pipetting into the wrong well. It is recommended not to change the pipette tips when dispensing the mix to plates, and to use Sartorius Low Retention Safetyspace™ Filter tips, thus reducing the loss of viscous liquids, such as GrowDex. The additional use of single-channel pipettes in combination with multidispensing mode will reduce sample loss by avoiding the large dead volume which often remains in reagent reservoirs. 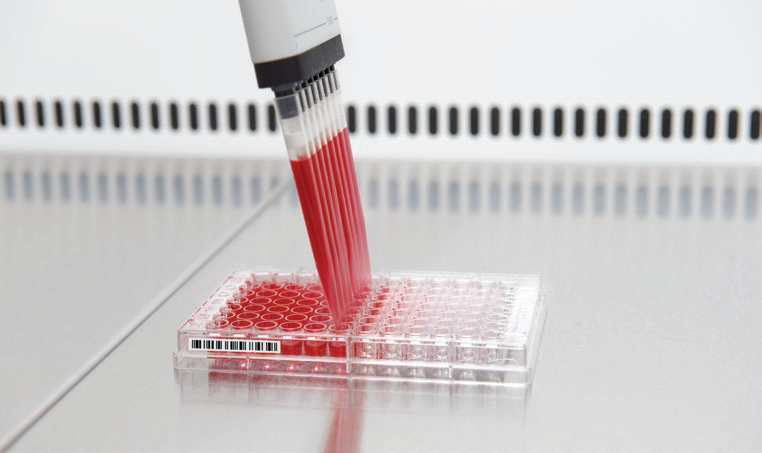 GrowDex® was quantified with Calcofluor staining. Calcofluor White stain (Cat. No. 18909, Sigma-Aldrich) was added 1:40 as part of the diluent, 10% FBS (Sigma-Aldrich) in RPMI 1640 medium (Lonza), so that the final concentration of GrowDex was 0.4%. The staining was done according to the manufacturer’s protocol. 30 µL was dispensed per well on a black Perkin Elmer 384-well Optiplate with a Picus® 300 µL single-channel electronic pipette and multi-dispensing mode (10 x 30 µL). Alternatively, 100 µL was pipetted per well on a black Perkin Elmer 96-well Optiplate. Low Retention Safetyspace™ Filter tips and normal Safetyspace™ Filter tips were used. The fluorescence (Ex 340-10 nm | Em 450-10 nm) was measured with a Fluostar Omega (BMG LABTECH) plate reader.

A formazan-based assay (Cell Counting Kit – 8, Cat. No. 96992, Sigma-Aldrich) was used to quantify viable cells in a cell culture according to the manufacturer’s protocol. Viable HeLa cells (Cat. No. 93021013-1VL, Sigma-Aldrich) in each well on a 96-well plate was measured by absorbance (at 450 nm). The assay plate was first pipetted without creating bubbles, and cells were quantified over a gradient of cell densities, which were made by serial dilutions of a stock solution. The differences in viable cells were compared to the results from careless mixing generating bubbles.