MCF7 is an adenocarcinoma cell line derived from breast tissue with metastatic and pleural effusion morphology (American Type Culture Collection; ATCC). As it is one of the few cancer cell lines expressing estrogen receptor α (ER-α), it is the most published cell line in the field of breast cancer research (1).

Traditional two dimensional (2D) in vitro cell culture systems are being replaced by more functional three dimensional (3D) models. 3D cell culture provides cells with biologically more relevant microenvironment concerning stiffness and ECM dependent regulation to form 3D cell structures, as well as physiologically more relevant diffusion for drug efficacy studies (2, 3). In order to avoid the unknown factors in the culture system, the development of clean 3D culture scaffolds that are xeno-free, stable, and non-inducing, is essential for improving the relevancy and repeatability of the in vitro models.

In this study, the morphology development of MCF7 cells in wood-derived nanofibrillar cellulose hydrogel GrowDex® (3D), and in mouse tumor basement membrane extract (BME) Matrigel overlay culture (2.5D) are presented. The results demonstrate that both GrowDex and Matrigel support the formation of 3D spheroids during the 25 days of culture.

3D culture of MCF7 in GrowDex

MCF7 cells formed 3D spheroid structures both in GrowDex and Matrigel and the cells did not reduce their growth rate during the 25 days culture time (Fig. 1). Some apoptosis could be detected during cultures, starting from day 9.

The 3D environment of GrowDex with the cells seeded inside the hydrogel supported more homogenous and round spheroid morphology (Fig 2A). Matrigel overlay culture system seemed to enable spheroid merging and enhance randomly shaped, uncontrolled growth (Fig 2B). This could be as a consequence of various proteins and growth factors being present in the mouse tumor derived material.

3D cell culture enables more physiologically relevant models for various applications and it also gives novel insights into the biology of the disease. For example, in recent study with MCF7 3D assay it was demonstrated that in addition to the known ability of estrogen to promote cell proliferation, it may also inhibit metastasis indirectly via rearrangement of the actin cytoskeleton (4). 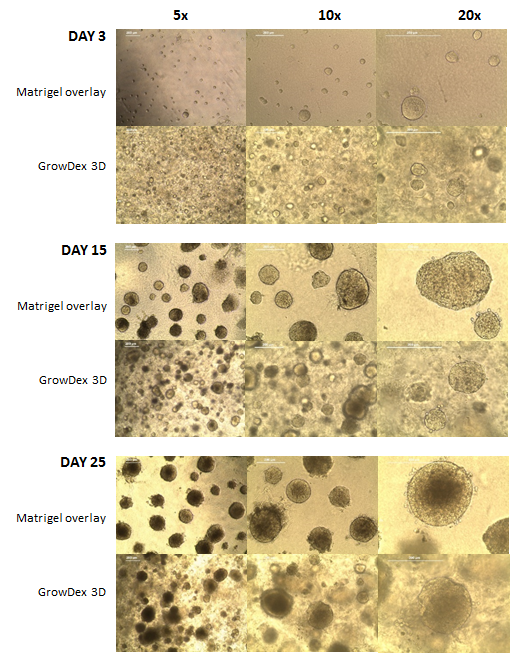 Figure 2. MCF7 spheroids in GrowDex (A) and Matrigel (B) on culture day 25. Spheroid merging and heterogenous spheroid morphology was enhanced in Matrigel cultures. Images were taken with 5x objective.

Improved functionality and relevancy of 3D cultures offer better in vitro models for e.g. disease modelling, drug development and toxicity assessment. Here we demonstrated that MCF7 breast cancer cells form 3D spheroid structures both in GrowDex and Matrigel. Spheroid merging and uncontrolled growth that was observed in Matrigel may be due to the presence of unknown amounts of different ECM proteins, growth factors and other biological signaling molecules in the material. Round spheroid morphology was observed in GrowDex. As a plant-based cellulose hydrogel, GrowDex offers an animal-free, clean, and well defined matrix for advanced MCF7 3D cell models. Further optimization of cell seeding density between 15-25k cells / 100 µl is recommended.