In drug research and development traditional two-dimensional (2D) in vitro cell models are commonly used to determine e.g. the drug efficacy. Unfortunately 2D models, and also in vivo experiments, are often unreliable and show different results than in humans. It is important to have representative in vitro models available already in the preclinical phase. Three-dimensional (3D) cell culture enables more functional cell models compared to traditional 2D models [1,2]. Co-culturing of more than one cell type in 3D environment presents more physiologically relevant conditions due to interactions between different cell types of the tissue.

In this study we present a 3D co-culture model of osteosarcoma cells (SaOS-2) with human dermal fibroblasts (HDF) in nanofibrillar cellulose hydrogel, GrowDex®.

•GrowDex concentration 0.5% was used for the cultures
•Cell seeding density was 625,000 cells/mL
•Both cell types were cultured separately, followed by the co-culturing
•Tested co-culture ratios were 1:1, 1:2, 1:4, 1:6 and 1:8 (SaOS-2:HDF)
•Total number of cells remained constant, only ratio between the cell types was changed

1.GrowDex was diluted to 0.5% with medium by mixing with a low retention pipette
2.Cell suspension was added and mixed by pipetting
3.50 μL GrowDex/cell mix was transferred into 96-wellplate and 100 μL medium was added on top of the hydrogel
4.Cultures were incubated in 5% CO2 at 37°C
oHalf of the medium was replaced every two to three days
5.Cell morphology and size distribution were analysed by light microscopy with Axiovert 25 microscope and AxioVision Rel. 4.8 software

6.Cell viability was quantified by CellTiter-GLO luminescent assay
-70 μL medium was removed. GrowDex with the medium was transferred in Eppendorf tube by pipetting
-30 μL CellTiter-GLO reagent was added to the samples and shaken 20min with 300 rpm at room temperature
-Samples were centrifuged at max. speed for 30s
-40 μL of the supernatant was transferred in the 96-well half-area luminescence plate and measured with Optima FLUOStar plate reader

Both cell types form 3D structures in GrowDex when grown in monoculture. SaOS-2 cells are more likely to form loose cell aggregates (Fig. 1A) and the HDF cells form compact spheroids (Fig. 1B). HDF spheroids reached maximum size after 7 days culture, and subsequently the size decreased. The SaOS-2 did not show size decrease over time. Co-cultured microtissues showed three different morphologies: a similar compact structure to HDF (Fig. 2A), loose microtissues similar to the SaOS-2 (Fig. 2B), and a compact core with loose cells around the core (Fig. 2C). The size distributions of co-cultured microtissues with different cell ratios at culture days 4, 7, and 14 are presented in Fig. 3. The microtissues showed smaller size with higher HDF cell numbers, which could be due to the inhibitory effect of HDF cells on the tumor cells (SaOS-2) [3].

Figure 1. Comparison of the monocultures after 14 days of cultivation in 0.5% GrowDex. A) SaOS-2 culture and B) HDF culture. The HDFs form small, compact and spherical microtissues, while the SaOS-2 form loose and grape-shaped microtissues. Scale bar is 100 μm. 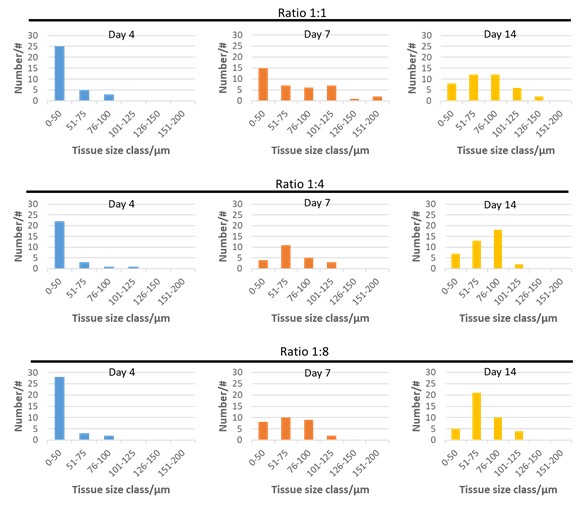 SaOS-2 and HDF were successfully co-cultured in GrowDex with different cell ratios. Microtissues showed different morphologies. Smaller microtissues were formed with higher HDF cell numbers, likely due to the inhibitory effect of HDF cells on the tumor cells. Further histological studies of the microtissues is required to analyze the cell distribution of SaOS-2 and HDF in the co-cultures. Co-culturing of SaOS-2 tumor cells with stroma cells (HDF) in 3D hydrogel results in physiologically more relevant microtissues that could be used as an in vitro model e.g. in osteosarcoma drug development.