2D cell culture models are routinely used for various cell culture assays including drug screening and toxicity studies, however they provide limited cell-cell and cell-ECM interactions. Spheroids, grown in 3D environment, show organizational similarities to tumor and can thus be used a relevant model for such studies. Here we have used GrowDex® cell culture matrix for development of spheroids using lung adenocarcinoma cell line A549.

Microscopic observation and simultaneous Live/Dead assay shows that the spheroids start formation by day 3 and continue to grow to a size of approximately 100 µm by day 15. They remain viable till the end of culture and are only slightly less viable than their 2D counterparts with highest viability on Day 5 (as seen in graph). 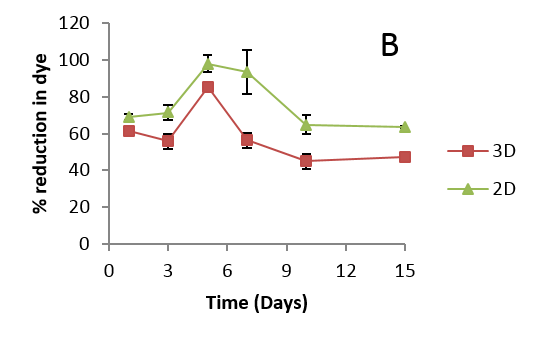 In conclusion, GrowDex provides an easy to use 3D support for development of A549 spheroids. Suitable optical properties of this matrix enable facile visualization of spheroids microscopically. The spheroids can be used for assessing toxicity of different formulations used for drug delivery. These can also be used in combination with other types of lung cells, fibroblasts and/or macrophages, for co-culture studies.