Bioreactors help to bridge the bench to bedside clinical translation of cell-based therapies with drug-testing platforms. They allow for the controlled delivery of nutrients and biomimetic stimuli for cell growth, differentiation, and tissue formation, whilst giving control over the spatiotemporal delivery of these biological, biochemical, and biophysical signals that regulate the cells and tissue development. As the field of regenerative medicine progresses, it is important to develop more physiologically relevant systems which closely mimic the diseased tissue and organs [1]. Here, a proof of concept study was performed to demonstrate the combination of GrowDex-T with the novel mini bioreactor system – VITVO, to recreate a complex layered structure.

GrowDex®-T is a bio-friendly hydrogel extracted from birch wood which is sourced from sustainable and responsibly managed forests. It is a transparent negatively charged hydrogel that consists of only nanofibrillar cellulose (1.0% w/v) and purified water (99.0%) making it ideal for use in brightfield, phase contrast and fluorescence microscopy applications [2, 3], as well as with high content imaging systems. Ambient handling and the shear thinning properties of GrowDex-T allows this ready to use product, which can be mixed directly with cells and culture media without the need for cross-linking steps, to be
customized to provide a controlled and completely animal free cell environment [4].

VITVO® is a versatile hand-held bioreactor which has been developed to recreate the in vivo 3D tissue-like environment, to culture and monitor normal and pathological cells in monocultures or in complex multicellular cultures. VITVO is a ready to use device comprising of two chambers separated by a fiber-based matrix composed of an inert, xenofree and biocompatible synthetic polymer [5]. This is held within a perimetral frame continuous with two optically transparent oxygenation membranes which allow gas exchange and visibility. Due to the porous nature of the VITVO matrix, paracrine signaling can pass between the two chambers.

Within this GrowDex-T and VITVO bioreactor system, GFP expressing adipose tissue derived mesenchymal stromal cells (GFP-ADMSCs), were mixed in GrowDex-T and loaded intothe lower chamber of VITVO. Whilst, GFP-ADMSCs were loaded into the upper chamber VITVO fibre-based matrix (Fig. 1). This model provides a closed system of two different “microenvironments” for the cells, where GrowDex-T provides one biomechanical cue and the VITVO fiber-based matrix able to provide an alternative cue.
Development of a complex multi-layered cell structure using a novel hand-held bioreactor

VITVO LOADING:
a) Stock GrowDex-T (1.0% w/v) was diluted, firstly with culture media and then with media containing GFP-ADMSCs, to make a final working solution with a GrowDex-T concentration of 0.2% and 1.43x105 GFP-ADMSCs/ml [4].
b) Working example: for 1 ml of final working solution, add 200 μl of GrowDex-T to 700 μl of complete media and mix thoroughly taking care not to create bubbles. Then add 100 μl of cells which are in suspension at a stock concentration of 1.43x106 cells/ml and mix thoroughly. This will give you a 1 ml working solution with 1.43x105 cells/ml in 0.2% GrowDex-T.
c) 700 μl of the working solution of 0.2% GrowDex-T with GFP-ADMSCs was aspirated from a petri dish with a 1 ml syringe and quickly injected into the lower chamber of VITVO.
d) In order to load cells onto the VITVO fiber-based matrix in the upper chamber without disturbing the GrowDex-T, a vent square was made in the upper oxygenation membrane (Fig. 1).
e) Following this, 700 μl of media containing 2x105 GFP-ADMSCs was aspirated into a 1 ml syringe, then injected into the upper chamber of VITVO by connecting the syringe to the upper port.
f) The total number of cells loaded within the device was 1x105 within the lower chamber in 0.2% GrowDex-T and 2x105 cells within the upper chamber.

GFP-ADMSCs were successfully mixed in 0.2% GrowDex-T and loaded into the lower chamber of VITVO, whilst cells in suspension were successfully loaded into the upper chamber, creating different layers in the VITVO device. Within both chambers, cells were cultured and maintained for 6 days. Cultures were monitored in real-time using fluorescence microscopy. GFP-ADMSCs seeded in the upper chamber onto the VITVO fiber-based matrix acquired their typical spindle shape morphology, proliferating and colonizing matrix fibers to recreate a tissue-like structure (Fig. 2, left column). Similarly, GFP-ADMSCs can be seen to proliferate and self-organize within the GrowDex-T (Fig. 2, right column). 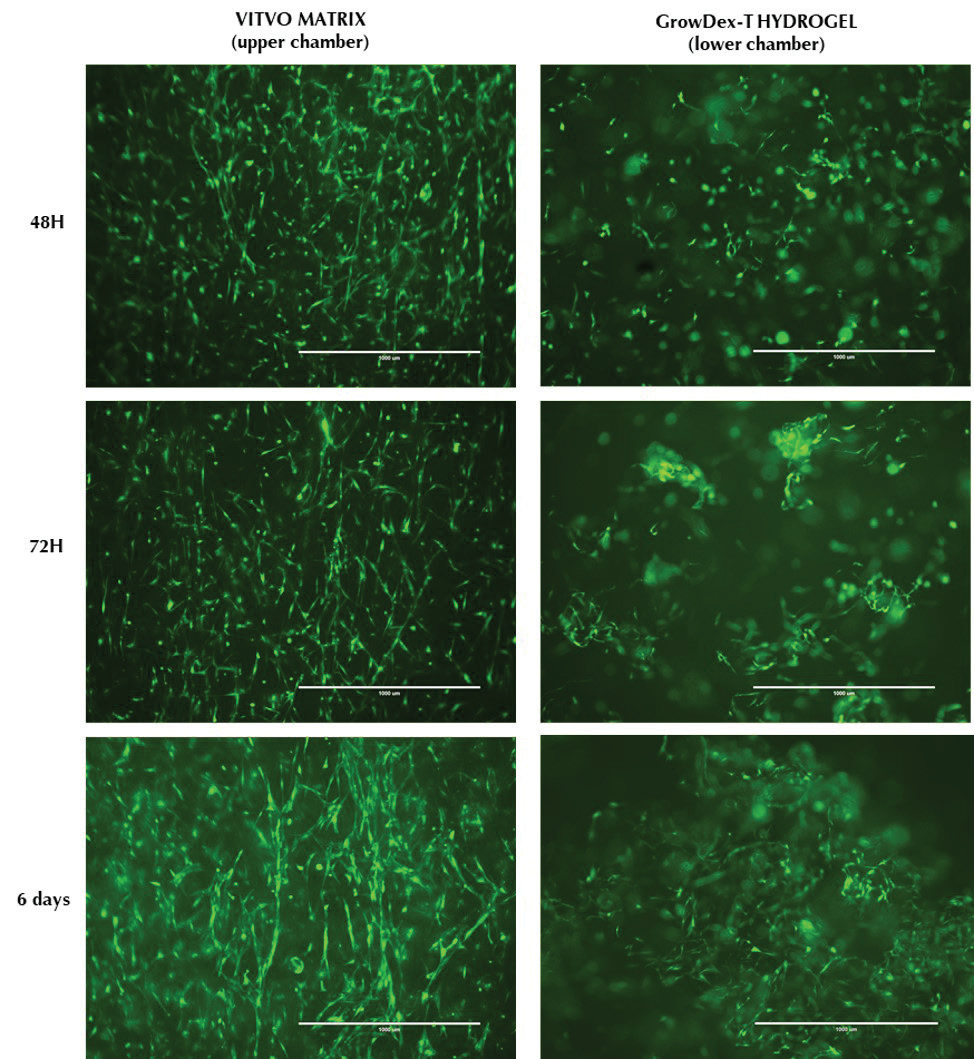 In order to visualize the distribution of cells and nuclei throughout the VITVO fiber-based matrix and GrowDex-T, a complete culture media change was performed through the upper chamber using media with NucBlue Live reagent following 7 days of culture. It can be clearly seen that the NucBlue Live reagent was able to easily pass through the central fiberbased matrix (Fig. 3A) as well as throughout GrowDex-T (Fig. 3B) staining the cells’ nuclei located within both chambers of VITVO.

Figure 3. Visual inspection of live cells by fluorescence microscopy. NucBlue Live reagent was used to
visualize the cell nuclei (blue) of GFP-ADMSCs (green) cultured within the VITVO fiber-based matrix (A) or embedded in 0.2% GrowDex-T in the VITVO lower chamber at 7 days of culture. Scale bar = 1 mm.

Here, it has been shown that GrowDex-T can be easily combined with the hand-held bioreactor VITVO, to create a complex multi-layered cell structure. In this study GFPADMSCs were successfully mixed in 0.2% GrowDex-T, as previously demonstrated [2], then loaded into the lower chamber of the VITVO bioreactor. GFP-ADMSCs were also loaded onto the fiber-based VITVO matrix in the upper chamber of the bioreactor, creating two separate layers. Cell cultures were maintained for one week and easily monitored in realtime throughout the culture period by fluorescence microscopy. It was clearly seen that the cells were able to proliferate and self-organize, displaying a spindle like morphology in both GrowDex-T and the fiber-based VITVO matrix. Quick and easy dissipation of the NucBlue Live reagent through the upper and lower chamber of the bioreactor allowed for clear visualization of both the cells and nuclei.

This proof of concept study presents a novel approach to create more complex in-vivo like structures, such as the transforming the investigation of paracrine signaling on skin wound healing from a simple 2D approach [6] into a multilayered, multicellular model. It may also provide a method for assessing the effects of controlled drug release from GrowDex-T [7] on cells cultured in either the upper or lower chamber of the bioreactor. The combination of GrowDex-T and the VITVO bioreactor provides an easy to monitor, multilayered approach to examine cell behavior as well as paracrine signaling and drug release effects on cells in either layer.

You can order products online at: www.upmbiomedicals.com/store.
Or contact us at biomedicals.sales@upm.com for a quotation or to place an order.