Diffusion of various molecules, such as nutrients and oxygen, in a 3D cell culture matrix is crucial for sustained viability and functionality of the cells. In cell-based drug efficacy screening and toxicity evaluation assays, it is essential that the drug/compound under test is able to reach the cells in the hydrogel layer easily. Typical set up for a 3D cell-based assay involves the drug/compound to be administered either on top of or below the cell-containing hydrogel layer.  The  compound will then be left to diffuse through the culture matrix. Physicochemical properties such as molecular weight, charge and lipophilicity of the drug molecules may affect the rate of diffusion. Earlier it has been reported that GrowDex supports 3D growth of various cell types, indicating that adequate diffusion of nutrients and gases within the hydrogel has occured. It has also been shown that the rate at which large molecules diffuse through GrowDex is dependent on the molecular weight of the molecule under test (Bhattacharya et al. 2012, Laurén et al. 2014).
In this study diffusion rates of small drug molecules, namely nadolol, ketoprofen and metronidazole were evaluated. Test drugs were administered on top of a 1% GrowDex layer that had been dispensed into a Transwell insert.  Samples from bottom well were collected and analysed using UPLC-MS to determine permeability of GrowDex.

The cumulative permeability of nadolol, ketoprofen and metronidazole during 48h is presented in Fig 1. Diffusion was slightly slower with GrowDex during the first 8 hours  when compared to control without GrowDex. The cumulative permeability of the drugs through the GrowDex layer reached the control levels by the 24h time point. The actual inputs were 1904 pmol/well for nadolol, 1614 pmol/well for ketoprofen and 1366 pmol/well for metronidazole. The recovery-% of all compounds was high, 90 % for nadolol, 95 % for ketorofen and 125 % for metronidazole, the values corresponded well with those recorded for the control samples minus the GrowDex layer. 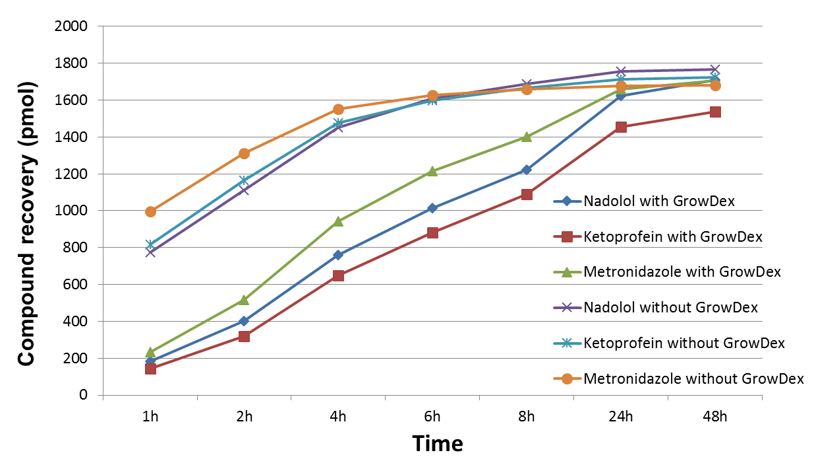 Fig 1. Cumulative diffusion rates of test drugs (pmol) with and without GrowDex hydrogel layer studied over a 48 hr incubation period at 37°C.

In this study we show that GrowDex readily allows the permeation of small drug molecules. The high recovery-% in both set-ups indicated that the drugs were not degraded during the process. Indeed, obtaining similar values for samples with or without GrowDex layer after 48 h also indicated that the drugs were not bound to the hydrogel. The charge on each drug molecule (nadolol=cationic, metronidazole=neutral, ketoprofen=anionic) did not appear to affect the diffusion rate significantly. In conclusion 3D cell models using GrowDex provide a suitable platform for e.g. cell-based drug efficacy and toxicity assays, where drug diffusion in the culture matrix is specially relevant.