In recent years there has been a drive to move away from the traditional 2D cell culture systems to what is considered the more physiologically relevant three dimensional (3D) models. It is thought cells cultured in 3D more closely mimic the in vivo cell niche that supports cell proliferation. Here we present a 3D model that has been developed for the culture of human embryonic stem cells (hESC) and induced pluripotent stem cells (iPCS) where WA07 and H9-GFP (modified from H9)hESC lines and iPCS (IMR90)-4 cells were used for the study. Cells were cultured in GrowDex®for 9 days in a 96-well plate format, where cell proliferation rates and spheroid formation was observed and reported. Spheroids provide an useful 3D model for studying disease states such as cancer and offer a simple to use platform for drug discovery and regenerative medicine research. Developing the assay in a 96-well plate format allows easy transfer to automated systems for scale up and higher throughput as required for high throughput screening (HTS).

Here, we propose a new concept of hPSC culture, which is a flexible, xeno-free 3D in vitro culture system. We have demonstrated cells can be successfully cultured, cell viability retained and spheroids formed ranging in size from 100-200 nm. Unlike most polysaccharide-based hydrogels that require a separate cross-linking step, GrowDex can be used following simple dilution with media. Additionally, hydrogels generated by cross-linking have fixed physical properties, whereas the physical property of GrowDex is dependent on its concentration determined by dilution, not on the degree of crosslinking. Phase-contrast images show that cell density and spheroid diameter increased with culture time. The cells in 3D spheroids remained alive during the culture as shown in live/dead viability assays at the end of sub-cultures. 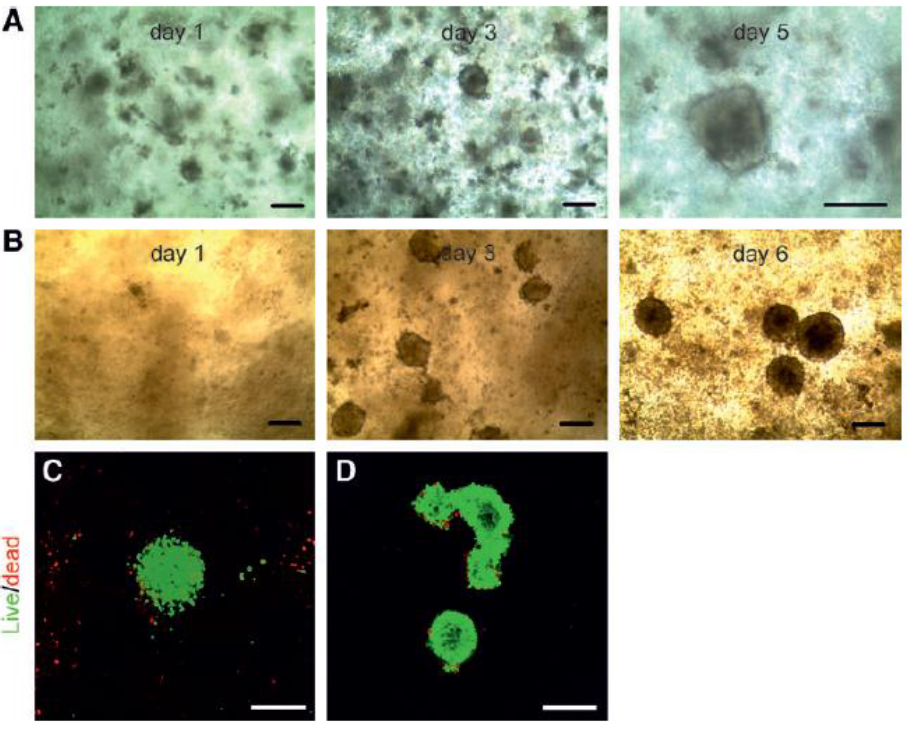 This study shows that GrowDex can offer a flexible, xeno-free 3D model for culture of hESC and iPS cells and opens up a new avenue for better recapitulation of the natural ESC environment and embryonic development. This previously has not been possible with conventional 2D cultures methods.