Many cells are anchorage-dependent, which means that they must adhere to a substrate to survive. In human or animal body, this substrate is often ECM, a network of insoluble protein biopolymers, which contains binding sites mediating interactions with cells. However, hydrogels intended for cell encapsulation are often lacking their own binding motifs, and therefore, incorporating adhesive motifs into hydrogels may allow cell attachment to mediate cell viability, proliferation and differentiation.

GrowDex®-A is an avidin-conjugated nanofibrillar cellulose hydrogel (Figure 1). Avidin is a tetrameric protein that is capable to bind biotin or biotinylated molecules with extreme affinity and specificity. Therefore, when biotinylated molecules are mixed with GrowDex-A, they will be efficiently bound to hydrogel. Using this strategy, GrowDex-A can be customized and functionalized with different biotinylated molecules e.g. proteins or peptides, to create a cell specific matrix for 3D cell culture assays.

Here we describe how GrowDex-A can be functionalized with biotinylated proteins that provide cell adhesion motifs. We selected fibronectin (FN) and vitronectin (VN) for chemical biotinylation, as they both serve as integrin ligands and contain an RGD-sequence, which is important for integrin binding [1]. The performance of GrowDex-A functionalized with biotinylated proteins (B-FN or B-VN) was demonstrated in 3D cell culture experiments using mouse embryonic fibroblasts (MEFs). We observed a clearly enhanced cell viability, when cells were grown within GrowDex-A in the presence of the anchored biotinylated proteins compared to GrowDex-A alone. The Live/Dead staining was used to visualize cells within hydrogels.

Purification and biotinylation of proteins:

Functionalization of GrowDex-A and embedding of cells: 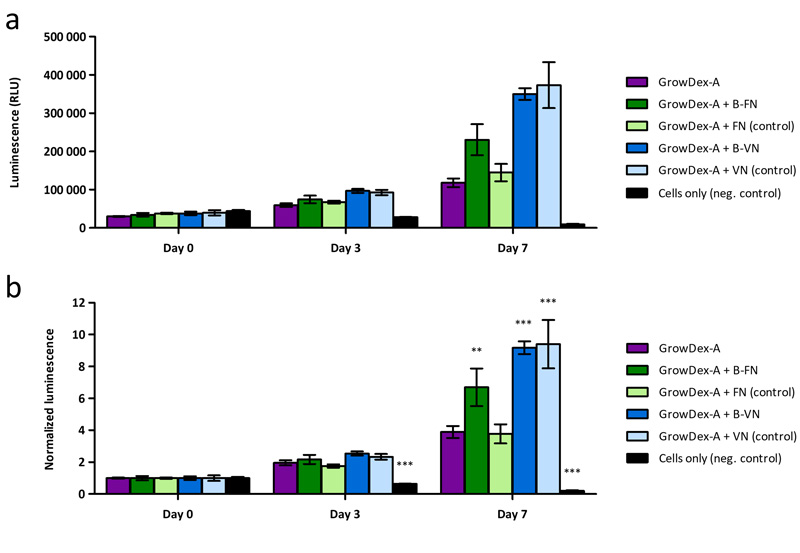 Figure 2. The CellTiter-Glo 3D Cell viability assay was used to determine the number of viable cells within GrowDex-A hydrogels functionalized by biotinylated fibronectin (B-FN), fibronectin (FN) control, biotinylated vitronectin (B-VN) and vitronectin (VN) control. A cell seeding density of 100 000 cells/mL was used and cell viability was determined on day 0 and after three and seven days of cultivation. (a) Relative luminescence units (RLU) of different samples. (b) The relative luminescence (RLU) values on day 3 and on day 7 of each sample were normalized by setting the luminescence values detected on day 0 to 1. Each bar represents mean value ± SD for three parallel samples. The statistical analysis was performed by comparing to GrowDex-A using one-way ANOVA and Bonferroni’s multiple comparison test, * = p < 0.05; ** = p < 0.01; *** = p < 0.001. Reprinted (adapted) with permission from Biomacromolecules 2021, 22 (10), 4122-4137. Copyright 2021 American Chemical Society.

Table 1, related to Figure 2b. The number of viable cells within GrowDex-A hydrogels functionalized by biotinylated fibronectin (B-FN), fibronectin (FN) control, biotinylated vitronectin (B-VN) and vitronectin (VN) control, and cells only as negative control, measured by the CellTiter-Glo 3D Cell viability assay. The relative luminescence (RLU) values on day 3 and on day 7 of each sample were normalized by setting the luminescence values detected on day 0 to 1

Live/Dead staining and confocal imaging was used to visually study the distribution and morphology of the MEFs cultured within different hydrogel samples (Figure 3). Most cells were alive in all tested conditions, indicating that all studied hydrogels were cytocompatible. When GrowDex-A was functionalized with biotinylated proteins, B-FN and B-VN, cells seemed to grow deeper inside the hydrogel and the morphology was more elongated than with cells cultured in hydrogel without adhesion proteins. In the presence of B-FN and B-VN, cells also seemed to form more contacts with each other. The results support the hypothesis that anchored fibronectin and vitronectin provide adhesion sites for MEFs and enhance their proliferation in 3D. 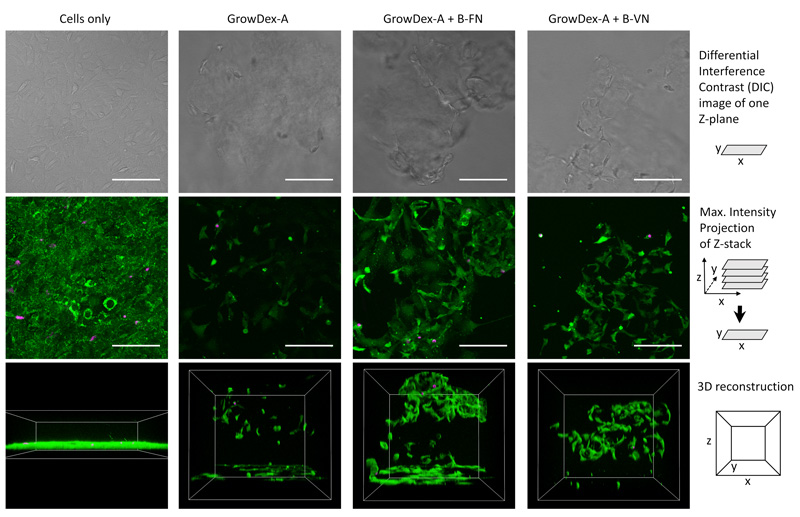 Figure 3. Confocal microscopy imaging of MEFs within GrowDex-A hydrogels (0.5% w/v) stained with Calcein-AM (green, live cells) and propidium iodide (magenta, dead cells). Cells were embedded in different hydrogels (GrowDex-A, GrowDex-A+B-FN and GrowDex-A+B-VN) using seeding density of 100 000 cells/mL and cultivated for three days. Cells only, is shown as a control sample. A differential interference contrast image of one Z-plane, a maximum intensity projection of Z-stack and a 3D view are shown for each sample. The scale bars are 100 µm. Reprinted (adapted) with permission from Biomacromolecules 2021, 22 (10), 4122-4137. Copyright 2021 American Chemical Society