Three-dimensional (3D) in vitro culture of neuronal cells is necessary to recapitulate the complex cytoarchitecture of the central nervous system. As complex, multicellular models develop, there is a need for defined substrates that can allow for the differentiation of iPSC-derived neurons and astrocytes.

Human induced pluripotent stem cell (iPSC) derived neural progenitors (Ebert et al. 2013) were cultured for one week embedded in GrowDex and on Matrigel
Studied GrowDex concentrations were 1, 0.8, 0.6, 0.4 and 0.2 wt%
GrowDex hydrogel volume was 100 µl in a Ibidi 96-well plate
Matrigel volume was 100 µl and used at a final concentration of 0.08 mg/ml. The media was aspirated and the cells were plated on top of the Matrigel layer
Cell concentration for all conditions was 50,000 cells per well
Cells were fed every other day with DMEM/F12 containing 2% B27.
Half of the media was replaced as to not disturb the hydrogel layer
The formation of neural cells inside the hydrogels was evaluated by immunocytochemical staining against βIII Tubulin and GFAP

After one week of differentiation, neural cells were observed by immuno-cytochemistry. Representative 10x images of neurons and astrocytes are shown in Figure 1. Qualitatively, neural growth increased as GrowDex concentration increased from 0.2% to 1%. Cultures in GrowDex resulted in 3D neural structures and outgrowth, whereas cells on Matrigel resulted in neuronal monolayer. 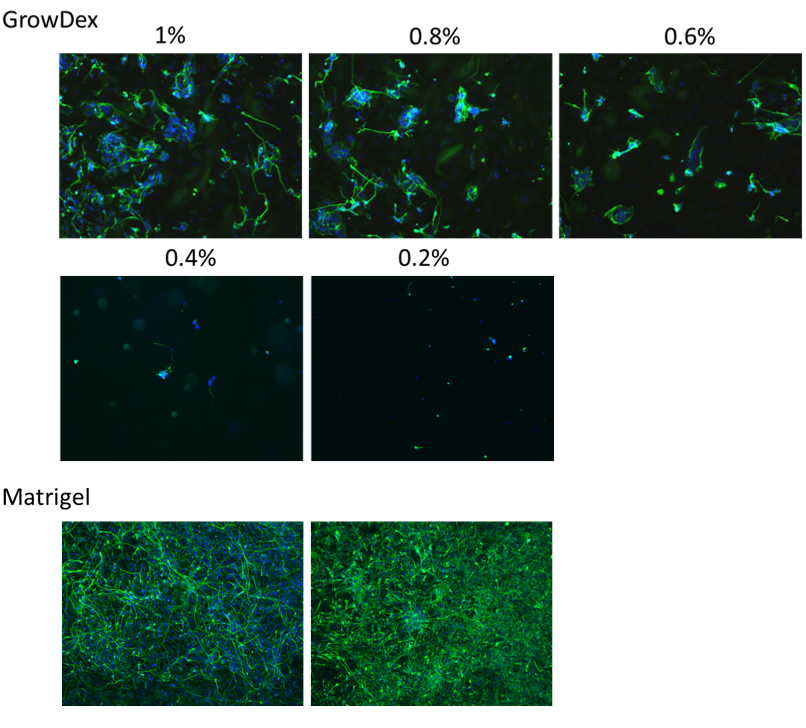 Compared to 2D, differentiation of neural progenitor cells in a 3D environment represents a more physiological approach to model organ-level responses. Neural progenitors grown on Matrigel differentiated into a monolayer of neurons whereas neural progenitor cells grown in GrowDex resulted in neuronal 3D structures. Based on the results, it can be concluded that GrowDex is a good substrate for 3D culture of human iPSC-derived neural progenitor cells and GrowDex concentrations of 0.8% and above are recommended. The biocompatible nature of GrowDex and ease of use in a 96-well plate format, provides a promising alternative scaffold for 3D cell culture. Notably, these results demonstrate that GrowDex could easily be adapted for use in 3D microfluidic neural cell culture models where a defined, animal-free, and tunable matrix is required. As 3D culturing becomes more common, GrowDex will be an important tool that may improve the success of new alternative models.