Glioblastoma multiforme (GBM) is the most common and aggressive brain tumour. Cell culture plays an indispensable role in the cancer drug discovery process. Notably, the majority of in vitro testing of anti-cancer drugs is carried out on traditional two-dimensional (2D) cell cultures. However, 2D cell culture only poorly represents the three-dimensional (3D) tumour microenvironment. Moreover, the high stiffness of plastic and glass substrates commonly used for 2D culture exceeds that of brain tissue resulting in stretched and unnatural morphology. The inability of 2D monolayers to closely approximate the pathophysiological conditions, has been shown to alter properties such as cell proliferation, morphology, gene and protein expression and ultimately, drug responses. Cultivation as self-assembled spherical clusters known as spheroids represents a widely used three-dimensional cultivation method for glioma cells. However, due to the compact nature of these `gliomaspheres`, the diffusion of nutrients and growth factors can be compromised [1, 2]. This highlights the need for novel 3D cell culture models that could act as better disease models and more sophisticated predictors in drug development [3].

Here, we developed a novel method for the 3D cultivation of the human glioblastoma cell line U251 within the nanofibrillar cellulose hydrogel, GrowDex®. We demonstrate that 3D cultivation of U251 cells in GrowDex results in an increased cell viability. Moreover, we show that in contrast to 2D, U251 cells in 3D respond in a linear manner to temozolomide which is an alkylating agent licensed for the treatment of newly diagnosed glioblastoma. This is in line with recent reports demonstrating that three dimensional matrices can affect cancer cell response to toxins [4].

Phase contrast microscopy and XTT viability assays revealed that U251 grow homogenously within GrowDex and that 3D cultivation results in a significantly increased cellular viability compared to 2D controls (Figure 1). Moreover, we show using confocal laser scanning microscopy that U251 cells are evenly distributed in all three dimensions of the hydrogel (Figure 2). Finally, a drug response assay showed that 3D cultivation leads to a linear reduction of viability in response to the cytotoxic temozolomide stimulus (Figure 3). 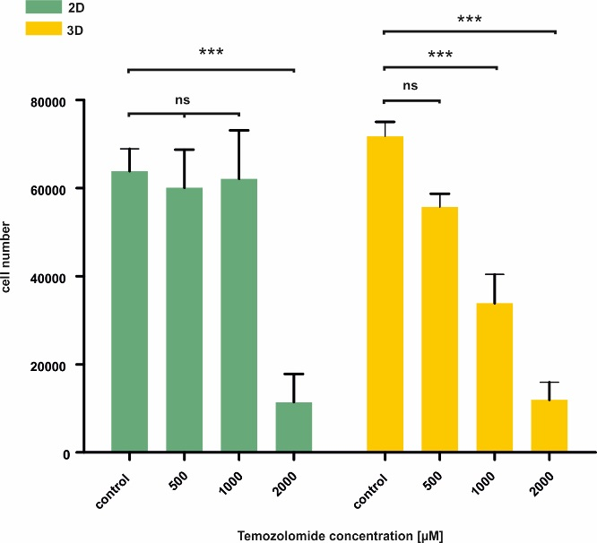 Figure 3. 3D cultivation within GrowDex results in a linear response to the cytotoxic drug temozolomide. U251 cells cultivated in 2D and 3D were exposed to increasing concentrations of temozolomide followed by assessment of viability using XTT. Statistical evaluation of the data revealed that cells within 3D respond to the toxic stimulus in a linear manner whereas only high concentration of temozolomide significantly reduce the viability when cultured in 2D. Data is displayed as mean of three independent experiments ± SEM. ns: not significant. ****P < 0.001.

Our results show that GrowDex is a suitable scaffold for 3D cultivation of the human glioblastoma cell line U251. Moreover, we show that GrowDex leads to an increased viability over concentration range from 0.1-0.4% when compared to 2D culture. Finally, we demonstrate that 3D culture in GrowDex can mediate a more linear drug response in comparison to conventional 2D culture. The results indicate that 3D cultivation of glioma cells within GrowDex might better reflect the pathophysiological environment and could improve current 2D cell-based drug screening platforms. Notably, our method could be easily adopted for primary glial cells, other glioma cell lines, and primary glioma cell cultures.