In the individualized systems medicine, patient-derived cancer cells (PDCs) are utilized ex vivo to study the drug responses at the individual patient level (Pemovska et al., 2013; 2015; Pietiäinen et al., 2014). When studying solid tumors, 3D cell culture conditions are considered to be physiologically relevant as they may resemble the tissue surrounding the tumor cells (Horvath et al., 2017). Importantly, the PDCs grown in 2D or 3D cultures should be genetically characterized to confirm that they carry the same cancer driver mutations as the original tumor they were derived from (Saeed et al. 2017; 2018). To this aim, for example exome or panel sequencing is performed to germline sample (blood), tissues and PDCs. Typically, the DNA isolation is performed from PDCs using commercial column extraction methods. However, the properties of many 3D matrices may not allow the proper filtration of samples through the DNA isolation column, resulting in an insufficient coverage of the DNA. We tested in this proof-of-concept study a direct recovery of DNA from cells grown in GrowDex® after degradation of the matrix with GrowDaseTM cellulase enzyme.

Here, we describe a streamlined workflow for constructing an NGS whole exome sequencing (WES) from a low amount of PDCs grown as spheroids in GrowDex.

The PDCs formed spheroids of 60-120 microns in GrowDex (Fig. 1A) in 24-well plates. After GrowDase treatment, the hydrogel was degraded but the spheroids stayed intact (Fig. 1B). 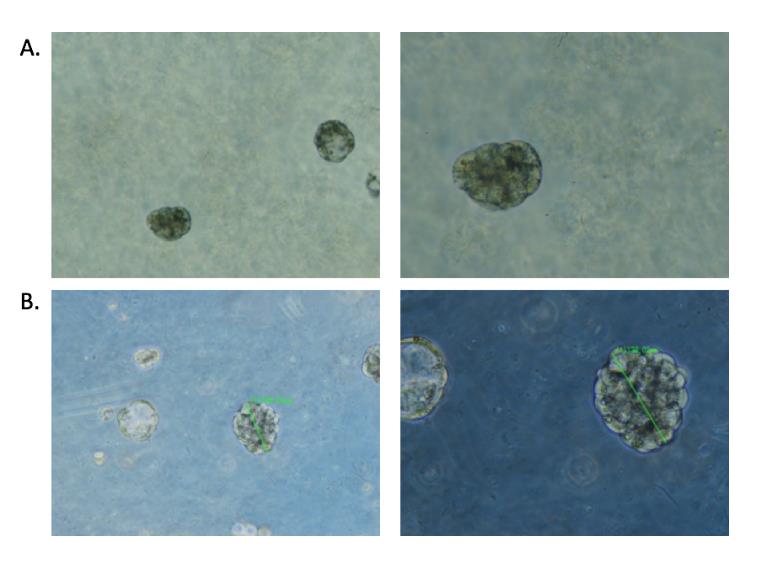 GrowDase treatment was crucial for the successful bead-based isolation as the cell-bead-complex was difficult to handle in the absence of the treatment. GrowDase treated spheroids combined with beads were robustly processed on the magnetic rack. The yields of the bead-based direct isolations varied from 200 to 600 ng of DNA.

The success of exome capture is critically dependent on the amount of input DNA. This may have caused variation in the results. While in general the good yield of DNA was obtained from samples (Table 1), the yield of the library before exome capture was not equally high in all of the libraries, varying from 200 to 774 ng of DNA (data not shown). The results were comparable with 2D culture of the same sample. The applying of the sample immediately after GrowDase treatment to Dynabead reaction may improve the results, and the effect of longer storage of sample at 4°C prior to DNA isolation should be systematically tested.

Table 1. NGS analysis statistics of libraries from PDCs grown either in 2D or in 3D in 0.4% GrowDex.

To gain more molecules suitable for amplification, the ligation time was prolonged from 15 minutes to an hour. PCR cycles remained the same throughout the optimizing of reactions. Here, overamplification was observed with some samples with PCR duplication rates as high as 66% of the library, suggesting that the ligation conditions and PCR cycles may need further optimization when a low amount of input DNA is available. This could help to gain enough diversity for the sample library.

The comparison of sequencing results revealed the similar coverage in the sequencing of DNA isolated from PDCs cultured either in 2D on plastic or 3D in GrowDex as exemplified in Fig 2.

Our proof-of-concept study introduces a method to efficiently isolate DNA from PDCs grown as spheroids in GrowDex. The enzymatic degradation of GrowDex with GrowDase makes the cells accessible for lysis and bead-based DNA recovery. Recovered amount and quality of DNA is sufficient for NGS library construction, when enzymatic DNA fragmentation is used in combination with extended ligation times. Protocol may require further optimization depending on the amount of cells used and GrowDex concentration.

This straightforward protocol omits additional purification steps typically present in NGS library construction, which is important for characterization of PDCs grown in 3D conditions in GrowDex.