1 Department of Otolaryngology-Head and Neck Surgery

3 Department of Communication Sciences and Disorders

In 2018, the WHO reported that sensorineural hearing loss (SNHL) affects 6.1% of the world’s population (466 million people). This is estimated to rise to 900 million people in 2050 [1]. Stem cell therapy is a promising method to alleviate SNHL, but its potential is currently hindered by low cell survival post transplantation [2-5]. The harsh, nutrient deprived environment of the cochlea is thought to be a leading factor in poor cell survival [6, 7]. Therefore, for human embryonic stem cell (hESC) derived otic neuronal progenitors (ONP) to survive in the inner ear, a suitable stem cell niche is needed. To alleviate this problem, we have evaluated the use of GrowDex®-T in a 3D cell culture setup, to establish a robust and reproducible in vitro assay whilst developing an artificial stem cell niche. GrowDex-T was used as an artificial extracellular matrix for the delivery of hESC-derived ONP spheroids along with brain derived neurotrophic factor (BDNF) PODS™-crystals into the mouse inner ear.

Figure 1: The schematic diagram (A) illustrates hESC-derived OPN spheroids were formed and embedded in GrowDex-T premixed with PODS-hBDNF with the addition of neuronal induction media (NIM) above the GrowDex-T. Phase contrast imaging of the OPN spheroids in GrowDex-T (B) demonstrated that they maintained their shape and integrity from 24, 48 and 72 hours without PODS-hBDNF (a-c). Whereas, when the spheroids were cultured with PODS-hBDNF (d-f), it appeared that the PODS-hBDNF may have acted as a chemo-attractant (white arrows) leading to a more differentiated phenotype. 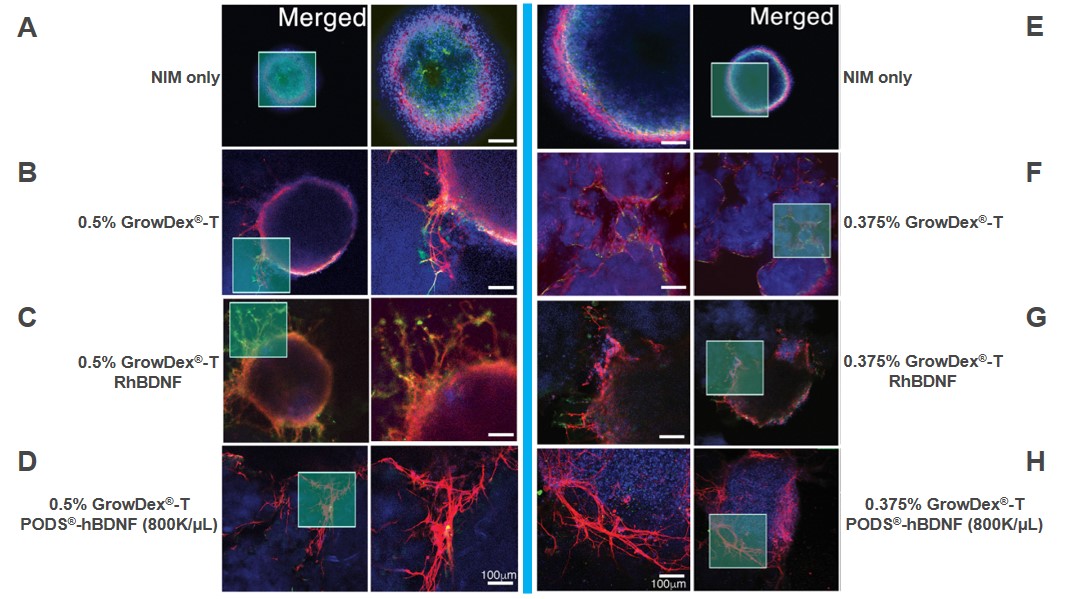 PAX8 is an otic lineage marker. It is known to peak at the otic placode or otocyst stages of development, then downregulates after this point of differentiation. Targeted staining of PAX 8 and β-III tubulin enabled the researchers to determine the differentiation potential and neuronal network development of the hESC-derived OPNs respectively. Notably, when compared to the NIM controls, the expression of PAX8 was significantly lower in OPN spheroids cultured in a combination of GrowDex-T with either RhBDNF or PODS-hBDNF (Figure 3 A). 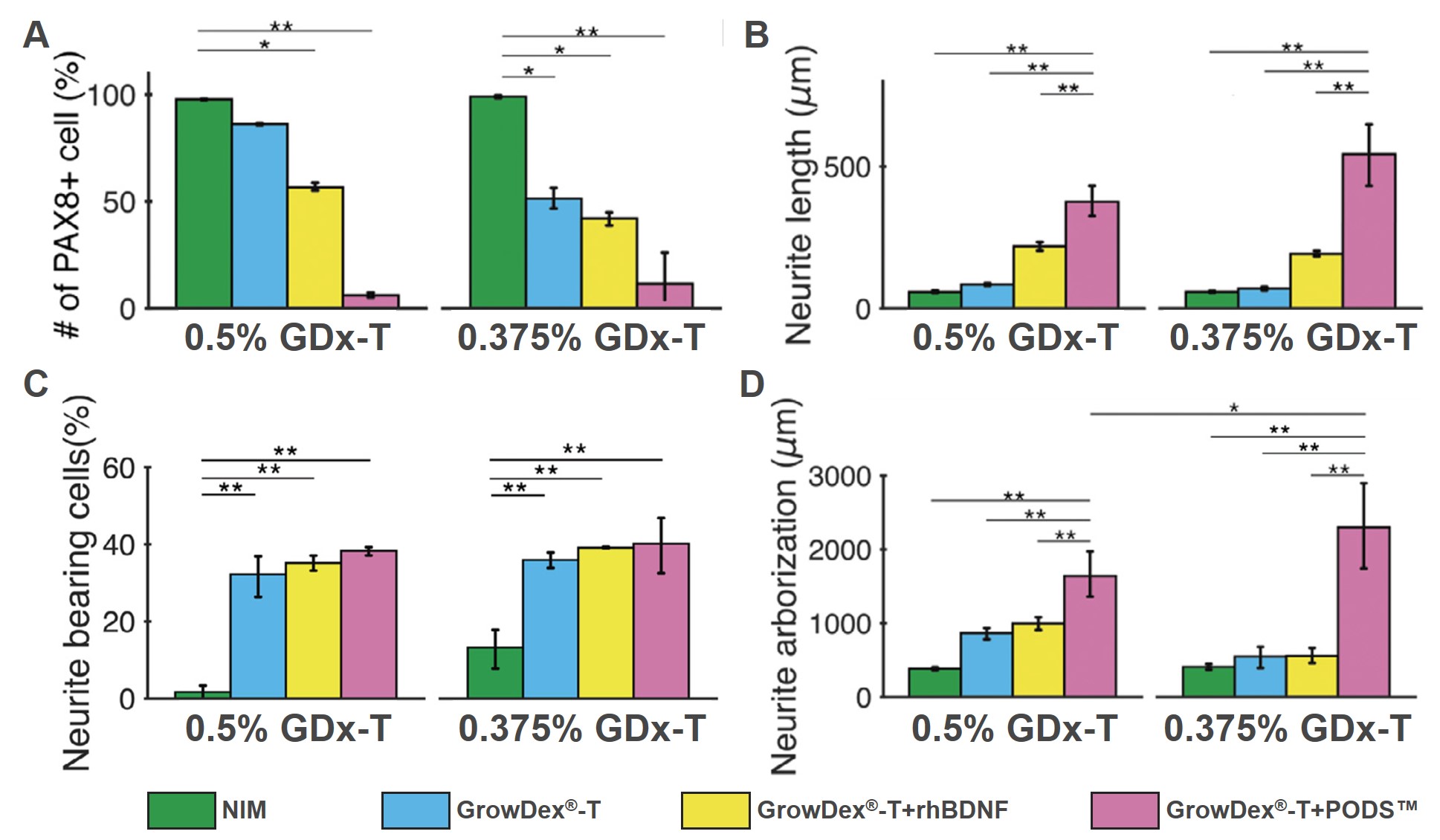 Our protocol presented here provides sufficient evidence that we have established a robust, reproducible protocol for in vitro otic neuronal differentiation of hESC-derived ONP spheroids. Using our protocol to create an artificial stem cell niche in the mouse inner ear using 3D spheroid formation, GrowDex®-T as an ECM, and the PODS® polyhedrin delivery system for the continuous provision of BDNF, it is possible to work toward integrating transplanted hESC-derived ONPs further into the inner ear. Ultimately, this work is paving the way for the potential delivery of a regenerative medicine therapy towards repairing sensorineural hearing loss.

Results presented here have been sourced from Chang, H.-T. et al., (2020) with permission from the corresponding author.