Better in vitro cancer cell models are needed for e.g. cancer biology research and drug development. Traditional 2D cell cultures are being replaced with more functional and more physiologically relevant 3D cell models. Cancer cells derived from solid tumors or liquid biopsies, such pleural or ascites effusion, may require different culturing conditions. Anchorage-independency is a cellular feature facilitating the cells’ capacity to divide and function in the absence of surface to anchor with. Solid tissue cells may enter a programmed cell death (anoikis) when detached from their physical extracellular matrix (ECM), whereas metastatic cancer cells may bypass this mechanism in order to survive outside the primary tumor e.g. in bloodstream or effusions (1). Previously it has been demonstrated that nanofibrillar cellulose hydrogel, GrowDex®, offers a suitable 3D culture matrix for various cell types (2, 3, 4).

•To minimize 2D cell growth on the well bottom, microwells for suspension and GrowDex cultures were coated with 1.2% pHEMA .
•For coating pHEMA was mixed with ethanol and 40 µL pipetted into the microwells. The coating was ready when all alcohol had evaporated leaving a thin hydrophobic film covering the plastic surface.
•Wells for conventional 2D monolayer culture were left untreated.
•Cultures in GrowDex were performed with 0.4% GrowDex concentration.
•Cell seeding density was 8000 cells / well in 100 µL with 50 µL medium on top.
•Cells were incubated in 5% CO2 , +37°C and the medium was refreshed every two or three days.

BT474 cells formed loose clusters in suspension culture and round spheroids in GrowDex, while in monolayer culture the cells adhered tight to cell culture plastic and to each other forming seamless layers of cells (Fig. 1A). In GrowDex cultures the formation of spheroids occurred during the first day, resulting in symmetric, round and increasingly dense structures. Cell viability increased modestly in both monolayer and GrowDex cultures, reflecting the slow growing nature of the cell line (Fig. 1B). This was also evident from imaging both the pHEMA and GrowDex cultures, where the cellular structures did not increase significantly in size across the 6 day study. 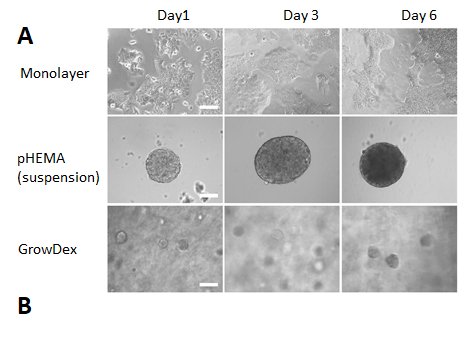 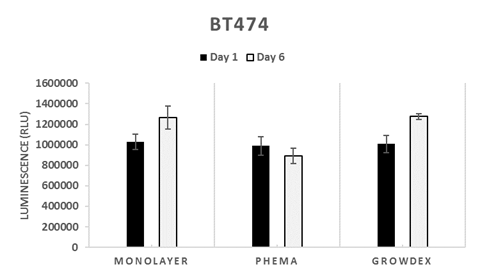 COLO205 cells showed a typical phenotype of suspension cells failing to differentiate into well-defined 3D structures (Fig. 2A). In the pHEMA coated wells the cells started to cluster indicating cell-cell interactions at day 6. In GrowDex the cells formed small clusters, but not round well-defined spheroids like BT474. Cell viability assay indicated that in monolayer culture there was a 3.4-fold increase from day 1 to day 6 (Fig. 2B). pHEMA culture displayed proliferation potential with a 6-fold increase from day 1 to day 6, in GrowDex the increase was 2.3-fold. The slower proliferation rate in GrowDex may be related to the fiber network affecting cell migration in the hydrogel. 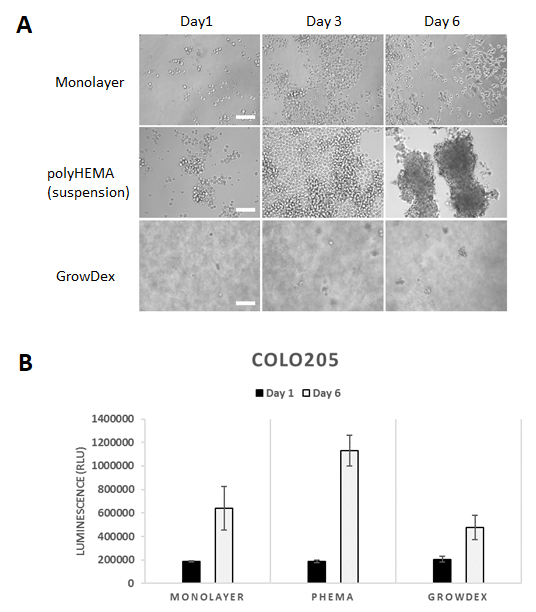 Both cell lines BT474 and COLO205 were able to proliferate and form 3D multicellular structures in GrowDex. BT474 is derived from solid breast ductal carcinoma tumor, while COLO205 is derived from colorectal carcinoma ascites metastasis. BT474 showed the formation of round well-defined spheroids in GrowDex and loose cell clusters in suspension. COLO205 expressed the typical phenotype of suspension cells without organized 3D structure. In GrowDex small multicellular structures were observed.

The results suggest that GrowDex can offer a suitable matrix for cancer cells derived both from solid tumors and liquid biopsies. Nanofibrillar cellulose can be considered as a biologically inert material, but the anchorage-dependency does not seem be a limiting factor for 3D cell culture in GrowDex.