Injectable hydrogels can be used as controlled drug release matrices, but their use is often hampered by the gel activation properties. GrowDex® is an injectable hydrogel that does not need a separate activation step. In this protocol, performing of an in vivo drug release study using GrowDex hydrogel in mice is described. Radio-labeled model drug compound NaI was embedded in radio-labeled GrowDex, the hydrogel was injected subcutaneously into mice, and the release of model drug compound was observed non-invasively over 5 hours using single photon emission computed tomography (SPECT/CT).

Both radio-labeled GrowDex and NaI were visualized with SPECT/CT imaging after subcutaneous injection to mice (Fig 1A). GrowDex remained intact without showing migration or disintegration during the experiment, when comparing 0 h and 5 h time points (Fig1 A-B). The distribution of 123I-NaI was seen mostly to thyroid glands, stomach and excretion to urine (Fig 1B). The 123I-NaI release from GrowDex and distribution to thyroid glands were quantitatively analyzed by recording the counts and calculating the activity at the injection site and target organ (thyroid glands) at different time points (Fig 1C). 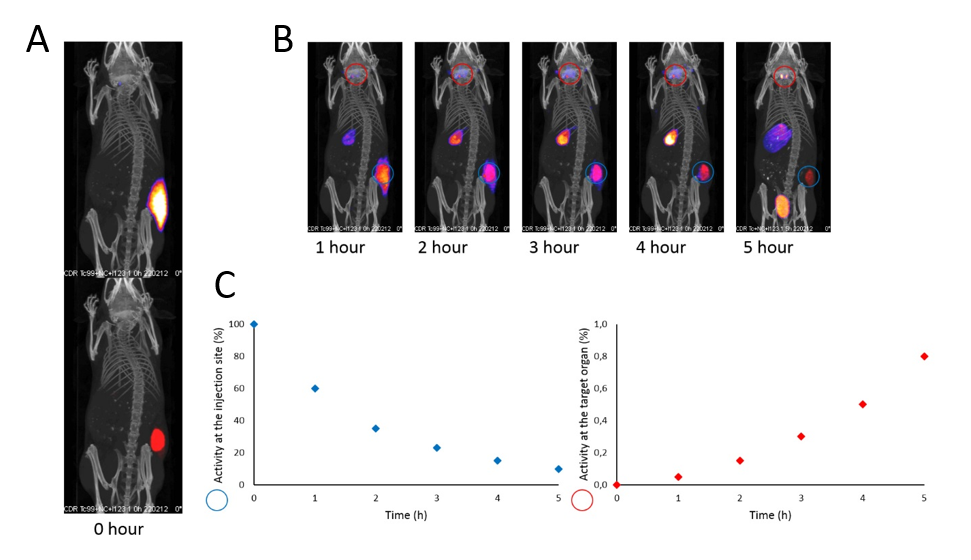 Figure 1. The release of 123I-NaI from radiolabeled GrowDex injection over 5 hours. A) Split image is shown to visualize both radio-tracers separately at the beginning of the experiment. B) Dual tracing images show GrowDex placement and stability, and 123I-NaI release and distribution to thyroid glands, stomach and urinary bladder. C) The release of 123I-NaI from GrowDex and distribution to thyroid glands were analyzed by image processing techniques.

The SPECT/CT study with radio-labeled GrowDex and model drug compound showed the possibility to trace both materials simultaneosly in vivo. GrowDex can be injected sub-cutaneously into the mice due to the shear thinning property of the material, and it remained intact at the injection site despite the activity of the animals during the experiment. The release of radio-labeled model drug compound, 123I-NaI, from GrowDex suggests the possibility to use GrowDex as a drug releasing implant.