Transduction with AAV and long-term culture of HUH7, primary hepatocytes and iPSc derived hepatocytes in 3D with GrowDex®

Adeno-associated viruses (AAVs) are non-enveloped single-strand DNA viruses which are nonpathogenic with little immunogenicity. AAVs are able to infect both dividing and non-dividing (quiescent) cells whilst remaining as an extrachromosomal vector without integrating into the host cells genome. Therefore, AAVs are the leading candidate vectors for human gene therapy.

Five treatments using AAVs have now been approved for commercialization whilst many more are currently under clinical trial and development [1]. AAVs can be delivered directly to a patient (in vivo) or to a patient’s cells ex vivo, where they are then implanted back into the patient.

Screening for AAV gene therapy candidates for in vivo and ex vivo therapy is usually performed on 2D cell culture models thought to be a more high-throughput approach. However, such a rudimentary approach and culture model does not reflect the physiological cell environment accurately, specifically lacking the role of the extracellular matrix (ECM) and cell-cell 3D contact, finally allowing only short-term studies. Therefore, it is important to develop more physiologically representative culture models with high throughput screening capabilities and long-term culture time, to screen AAV gene therapy candidates for successful clinical therapy.

The study presented here had three main objectives. The first objective of this study was to culture primary hepatocytes (PH), induced pluripotent stem cell (iPSC) derived hepatocytes and HUH7 hepatocytes in GrowDex to generate spheroids for up to 25 days. Secondly, it was necessary to determine if the hepatocyte spheroid culture model would allow functional AAV transduction (integration of the virus into the cell followed by expression of the gene of interest). Finally, it was important to determine how long the spheroids could be cultured, remaining healthy and functional. 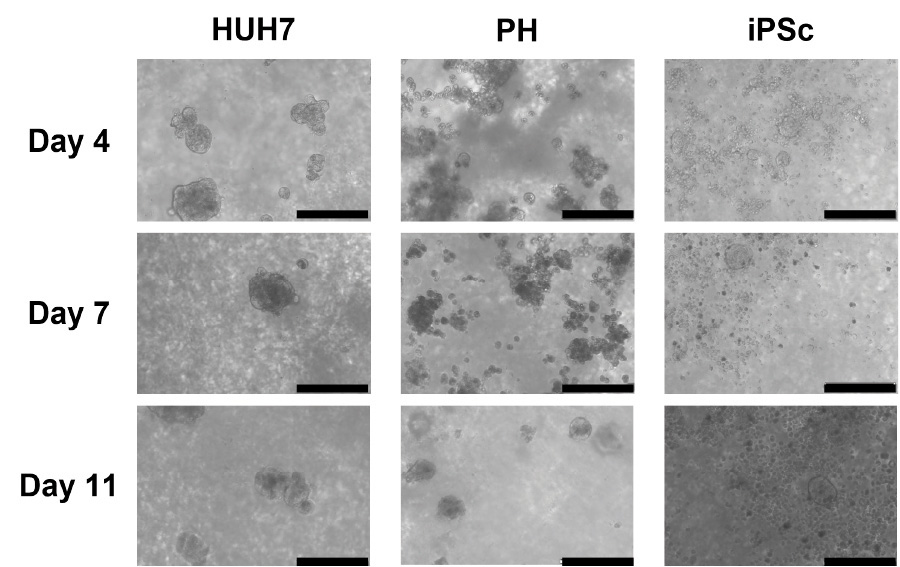 Figure 2. Examples of tight spheroids 11 days post seeding for each different hepatic cell type. Spheroids could be seen to form from 1 day through 10 days depending on the cell type. Scale bar is 100µm.

Cells and spheroids showed a normal and healthy morphology up to 25 days of culture (Figure 2 and Figure 3). Following 25 days post seeding, spheroid size and quality appeared to reduce, and the morphology was seen to have altered. Thus, showing that the culture model requires improvements, such as testing the viral titre, the cell seeding density as well as the media composition to better support the cells. 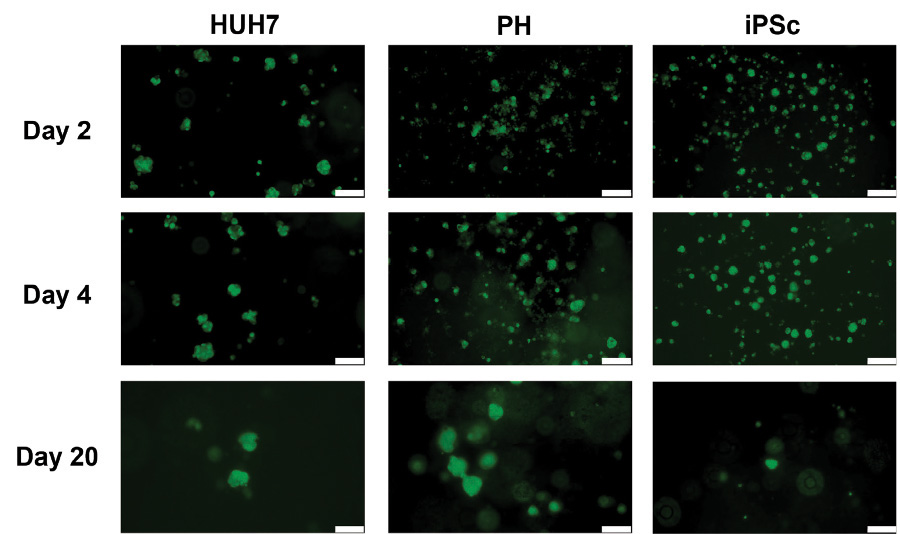 Figure 3. Functional transduction efficiency in spheroids from three different hepatic cell type. Cells were transduced with AAV-GFP 30 minutes after seeding on 0.5% GrowDex matrix. GFP expression was monitored using a fluorescent microscope from 2 through 20 days of culture. Scale bar is 200µm.

As shown in Figure 4, LDH levels in both the untreated control and AAV treated cultures were high from the iPSc derived liver cell cultures, decreasing steadily through 15 days of culture and stabilizing as cells proliferate and form spheroids. Additionally, in both culture conditions, the LDH levels from HUH7 and PH cells were also seen to stabilise from 12 days post seeding.

The levels of LDH may be explained by the cells in the early days of culture whilst forming cell clusters and subsequent spheroids. This is especially evident in the iPSc cultures. Therefore, it is suggested to seed cells at a higher seeding density when repeating this culture.

Figure 4. Evolution of the LDH release in the culture supernatant of the spheroids from three different hepatic cell types. Cells were seeded and cultured as control (left graph) or transduced (right graph) with 5e5vg/cell AAV-GFP. Supernatants from all cultures were collected at indicated time points and stored at -20°C until the end of the study and analysed for LDH release. N=6.

It has been shown through this study that it was possible to culture primary hepatocytes, iPSC derived hepatocytes and HUH7 hepatocytes on GrowDex, and to quickly generate uniform and stable spheroids for up to 25 days.

However, it was also seen that during the first 10 days of cell seeding and culture, the levels of LDH were raised whilst cells were clustering and forming spheroids. These increased LDH levels were similar between both the control and transduced cultured and most pronounced from the iPSc derived hepatocytes. Thus, to improve cell viability and AAV transduction efficiency for iPSc derived hepatocytes, it is recommended to seed the cells at a higher seeding density or to allow the cells to form clusters and spheroids prior to AAV transduction or analysis.

More replicative 3D cell environment will help to improve, test and deliver AAV for safe and efficient clinical applications. These 3D culture models will also help to further the design of appropriate viral delivery vehicles where local, sustained, and controlled expression of therapeutic nucleic acids and/or proteins can be accomplished [2].

*Jonathan Sheard would like to thank and acknowledge the contributor who has chosen to remain anonymous due to company privacy policies, for their kind provision of this data and contribution to the completion of this application note.