Innovating beyond traditional applications: what’s next for nanofibrillar cellulose? Marjo Yliperttula, Professor of Biopharmaceutics at University of Helsinki is known for her innovative ideas and experiments. GrowDex® in fact, was born as a result of interdisciplinary research by UPM and a team of researchers from the University of Helsinki’s Department of Biopharmaceutics and Pharmacokinetics. Ten years later, Professor Yliperttula and her team are still very excited to work with the nanofibrillar cellulose hydrogel, now marketed as GrowDex, seeing a huge potential in expanding its application areas even further. In this special interview, Dr Yliperttula summarizes results from the studies published by her group, ranging from cell culture to drug delivery and wound healing, and discusses potential areas to be explored in future.

It was about ten years ago when the first batch of nanofibrillar cellulose (NFC) was delivered to Professor of Biopharmaceutics, Marjo Yliperttula. She remembers it like yesterday: the ‘wow’ moments experienced by her research group setting them off on their NFC journey.

“We had been testing lots of polymers for 2D and 3D stem cell culturing when we received a lot of UPM’s special NFC from them. When we started testing it, I soon realised we had a gold nugget in our hands. Whatever we tried seemed to work. Based on the promising early results I soon realised we should apply for a patent because the material was so good,” Yliperttula says.

With an ambitious dream for creating a three-dimensional “mini-man-on-a-chip“ with mini tissues for drug design and testing, the group first used GrowDex as matrix for 3D cell culture. In 2010, Yliperttula sold her innovation Nanofibrillar cellulose as cell culture matrix to UPM, and GrowDex was developed on the basis of this technology. But NFC turned out to be suitable for many other applications besides 3D cell culturing. Today, the co-operation between Professor Yliperttula’s group and UPM has resulted in ten patent families in about 80 countries, supplementing well the large biomedical and NFC patent portfolio of UPM.

“Nanofibrillar cellulose really is quite amazing: a non-animal, non-toxic material where small drug molecules can move quite freely. Studies have not reported any inflammatory effects when NFC comes into contact with tissues. Everything we have tested has worked,” Yliperttula says.

The varied applications of nanofibrillar cellulose

During the last decade, Yliperttula and her team have been up to their elbows with GrowDex-related work and the results have been good.

“We can now culture cells in it creating 3D spheroid structures in the matrix. We can remove the matrix by enzymatic degradation while retaining the structure. In addition, we have cultured the cells also on an NFC membrane. GrowDex has been used in drug delivery studies, and combined with alginate for coating of surgical sutures (see end of the article) to determine the impact on tissue surgery and cell implantation. The GrowDex hydrogel as such has also been tested in wound healing. Stem cells can be preserved in GrowDex and they will keep their plasticity for as long as required. We can also freeze-dry cells in GrowDex while retaining their structure,” Yliperttula lists.

The research group has published extensively on their studies on using GrowDex. Four doctoral theses have been published by spring 2018, and six more will be published during the next few years. 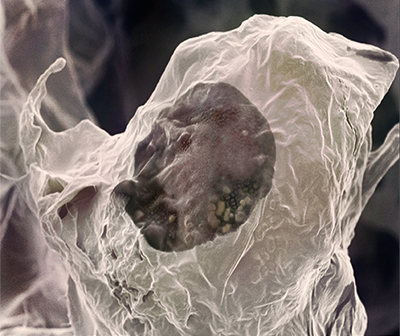 Figure 1. SEM image of a single HepG2 cell encapsulated in GrowDex after freeze-drying by Vili Auvinen and Arto Merivaara from University of Helsinki, Finland.

Currently Marjo Yliperttula’s research group is looking at long-term preservation of cells using GrowDex as a protective matrix. They are investigating how these cells can be recovered for use in critical care situations such as those experienced in a natural disaster. It is important that cells are viable and functional post-preservation. Significant development work and investigation into processes and techniques is still required to make this a reality.

Since launching GrowDex, UPM has continued to develop their product portfolio based on the patented nanofibrillar cellulose technology. One of the new focus areas of UPM is wound care. Yliperttula, whose group made preclinical wound care tests first with the “self-made” NFC membrane in 2010-12, has now been involved in a clinical research project with UPM. Yliperttula considers UPM’s new wound care product exciting: “Clinical trials have shown that it is a promising new dressing and the results are looking good.” Data from these studies have been published in the Journal of Controlled Release and presented at several conferences.

Cooperation of academia and industry speeds up science

The forest industry and the medical industry have strong traditions in Finland. Professor Yliperttula is proud of the fact that they have now been combined. She notes that the electronics industry could also be added to the equation, since nanofibrillar cellulose can be made electrically conductive.

“During the last four years, our cooperation with UPM has strengthened with both parties being very supportive of each other. You could call this the dream project of every university researcher. UPM has been courageous in stepping into a whole new area.”

Academia strives to deliver excellent science, whereas companies are interested in commercialising the scientific results and launching new products. According to Yliperttula, it is a relief for the researchers to leave things like regulatory issues linked to commercialisation to the industry since companies have resources that universities do not.
Innovative cooperation may create new jobs for both parties, and the journey with NFC has most certainly succeeded in doing this.

“Who would have guessed that the people from Department of Pharmaceutical Biosciences, in the biopharmaceutics discipline would be hired to work in the forest industry? I see that as a major benefit,” Yliperttula says.

She has experience of studying thin-film technology at Nokia, and she is contemplating on applying photodynamic therapies in her work in the future. Photodynamic therapy (PDT) is a cancer treatment that uses photosensitizers and light to produce a form of oxygen that kills nearby cells, thus shrinking or destroying tumours.

“Nanofibrillar cellulose in solar cells is an old story, but applying that technique in biomedicine would be a very interesting new thing to study. Sky is the limit with NFC, and anything that comes to mind is worth trying,” says Yliperttula.

In this study, the rheological properties of the GrowDex-alginate hydrogels were investigated and cell cultures with HepG2 and SK-HEP-1 cell lines as a co-culture model within GrowDex-alginate hydrogel and on the surface, respectively, performed. In addition, suture coating with GrowDex-alginate with HepG2 cells and performance of the coated sutures on pig liver tissue was demonstrated. Results revealed that the addition of sodium alginate 8% (w/v) increased the GrowDex storage- and loss modulus contributing significantly to coating strength. Confocal microscopy showed nearly 100% cell viability throughout the 2-week incubation period within and on the surface of the coating. Typical morphologies in the cell co-culture of spheroid forming HepG2 (inside coating) and monolayer type SK-HEP-1 (on top of coating) were observed (Fig. 1). Surgical sutures were successfully coated with GrowDex-alginate-HepG2 hydrogel, the coating remained intact during suturing operation with pig liver, and the cells remained viable.

Figure 2. SK-HEP-1 cells seeded on the surface of the GrowDex-alginate threads after 48h incubation (green). HepG2 cells (red) within the threads grew individually or in very small clusters; however, surface growth showed typical cluster and epithelial morphology of both cell lines.

Image text: Marjo Yliperttula in Female leaders to spotlight! campaign by keksiagency.fi. Professor of Biopharmaceutics Marjo Yliperttula received her Ph.D. in Chemistry in 1993 (University of Helsinki, Finland). During her career, she has e.g. served as Group Manager of Physical Chemistry, PK Simulations, and Early ADME at Orion Pharma. Currently, she is Professor of Biopharmaceutics at University of Helsinki and is known for her innovative ideas and experiments. Her main research interests include nanoparticles and drug delivery, 3D cell culture matrices and their modification, and wound care.