Evolution of FICAM and development of human relevant in-vitro models Professor Tuula Heinonen studied at the University of Turku, Finland, before gaining a PhD in toxicology for her work at the Institute of Occupational Health, where she performed animal toxicity and in vitro toxicity studies of chemical substances to assess the potential carcinogenic risk. After working in the pharma industry for 17 years, she came to the University of Tampere in 2008 to set up the Finnish Centre for Alternative Methods (FICAM). Tuula discusses how FICAM came into being, and its role in finding alternative models to animal testing.

A decade ago, Finland’s Ministry of Agriculture and Forestry had a working group looking into ways to promote the three Rs (3Rs) – replacement, reduction and refinement of animal models using in vitro techniques to develop alternative methods that would make animals' lives better and reduce the number of experiments being performed.

Establishing a replacement centre in Finland

There were already some 3Rs centres in Europe, and a group led by Hanna Tähti, a well-known pioneer of in vitro methods in Finland and part of the Ministry of Agriculture and Forestry working group, proposed setting up something similar at Tampere. “I had known Hanna for a long time – we had worked together in the Society of Toxicology – and so when she approached me to set up FICAM, I was keen to get involved”, Tuula explained.

“When I was thinking about the structure of FICAM, I decided to focus on animal replacement because of the expertise here in Tampere; professor (emerita) in toxicology Hanna Tähti and professor in cell biology Timo Ylikomi, excellent cell culture and in vitro facilities, and a long history in tissue engineering. At the same time, I saw that the EU directive 2010/63, which protects animals used for scientific purposes, was in the pipeline. After visiting a replacement centre in Austria and Germany, we drew up an action plan, which was accepted by the Dean of the medical school, Kaija Holli, who was another key player and supporter in establishing FICAM.”

A need for alternative methods

The 3Rs principle is usually discussed in terms of ethics, but it actually benefits science too; experimental results tend to be better when the animals are not stressed. There is also a demand for replacement models for experiments that are too costly or just not feasible to perform in animals – for example, testing nanoparticles with large-scale developmental toxicity studies or for systemic toxicity – and, with the development of ‘omics’ technologies, there is increasing evidence that animal and human biology are more different than had been fully appreciated which leads results from animal studies which are not transferable to human situation. While some animal testing is necessary in case of adverse events, viable, relevant in vitro tests would reduce these to a minimum and may give more human predictive data. Tuula continued: “Currently, regulators accept the use of alternative methods for some topical applications, for example to look at skin and eye irritations and skin sensitisation, as well as genotoxicity and phototoxicity testing. However, tests to determine carcinogenic risk still need to be performed in animals, and no in vitro tests to assess systemic toxicity are currently available.”

Education is the key to moving away from animal testing, changing the paradigm from animal-based science to in vitro human cell-based systems. Tuula said: “At the moment, people are not aware of the alternatives to animal testing, and so sharing information is critical. There is also a need for more funding to support the development of in vitro tests, as many of the current tools and models used in the scientific community are not really relevant. For example, only eight per cent of drug candidates entering the development phase actually make it to the market, and the biggest reason for failure – 63 per cent – is lack of efficacy. It's now better understood that the tissue biochemistry in rats and mice is different to humans, and it’s not surprising that potential drugs that pass efficacy testing in animal models frequently fail in clinical trials in humans.”

While 2D cultures provide a great deal of information, they do not mimic real 3D tissue infrastructure. “We need to use models that mimic human tissue as closely as possible, which requires 3D culture. When we develop a 3D model, our approach is to characterise it structurally and gene expression levels to make sure it looks like the tissue of interest and is expressing the correct genes. We also use known reference chemicals to check for positive or negative mechanisms that could affect the study, evaluating the functional parameters to ensure that general cytotoxic effects can be differentiated from drug effects. This has enabled us to develop and validate a model to test the inhibition of vasculogenesis and angiogenesis by cancer drugs, and to evaluate potential teratogenicity of any chemical in the developing foetus.” This test methods is now submitted to the OECD testing methods.

“I first came across GrowDex® a few years ago when I went to a presentation about culturing liver cells in this animal-free matrix. GrowDex is a very good 3D matrix because it is inert and fibre-like, and doesn’t exhibit mouse biology or contain mouse growth factors. This means that you can add human growth factors and build a human tissue-like infrastructure. We have used GrowDex with hepatoblastoma cell line, hepatic cells derived from human liver progenitor cell line, embryonic stem cells, human induced pluripotent stem cells, macrophages, monocytes, and human fibroblasts, and have had received some promising innovations. UPM is collaborating with us to evaluate the data, using its in-depth knowledge of GrowDex to critically appraise the results from a neutral standpoint while we assess the results from a scientific perspective. This saves time and helps us to establish what does and doesn’t work. It’s an arrangement that is working very well,” Tuula concluded. 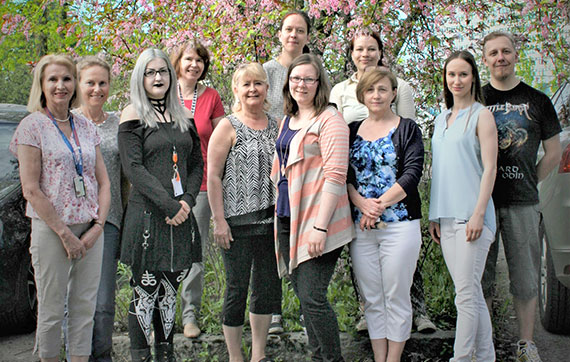